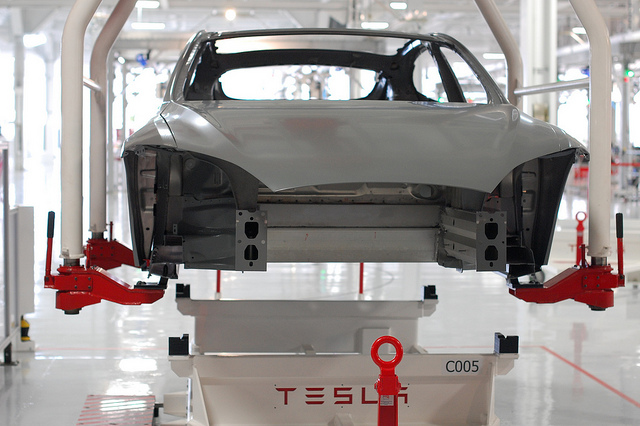 While the location of Tesla’s new lithium battery facility in the US is still being decided, the premium electric vehicle maker has announced its decision to use only raw materials sourced in North America for the batteries produced at its proposed new facility in the southern US, making for shorter, less costly delivery routes.

The proposed size of the new $5 billion ‘gigafactory’ means the supply of materials is an important consideration, including the distance transported and the availability of the material at source. Therefore the company has announced it will only use graphite, cobalt and other materials needed for production from the US and Canada, enabling it to lower its environmental impact and costs. It is thought that the costs of its batteries will reduce by up to 30% with the move to North American supply according to Tesla.

The company manufactures the Model S and said that the vast majority of the graphite used in the construction of lithium-ion batteries, which are used to power the vehicles, currently comes from Japan and Europe. Overall costs associated with graphite production have increased in recent years

There are also factors affecting the supply of the material. According to industry intelligence from Industrial Minerals Data, demand for the material is expected to significantly increase in 2015 as battery production returns to the strong demand levels seen in 2011 and 2012. There is also competing demand from the steel refractory industry.

In addition, the pollution associated with its manufacture has been an issue in industrial circles in recent years. In China, for instance, mines and plants producing the material have been gradually closed. This has led to a shortage of supply, although China remains the lead supplier in the material, holding 71% of the world’s reserves.

Tesla may therefore turn to Canadian mines, which have yet to be built, and may provide cleaner sources of the material.

There are also issues with cobalt supply. Without more cobalt supply in North America it is feared that the factory will strip the global rate of the material given its size. Around half the world’s cobalt supply is currently mined in the Democratic Republic of Congo, which continues to be an unstable market following war and allegations of corruption.

Nevertheless, in February of this year the carmaker announced that enough rechargeable lithium-ion batteries would be created by 2020 to power 500,000 cars – singlehandedly doubling the global output of such batteries.

Tesla has not yet selected a location for the plant as yet, though last week two cities which had hoped to contend for the premium spot were disappointed.