The road to 4m cars is paved with rail

With the Indian market on pace to surpass 4m units a year in the next five years, manufacturers are increasingly dissatisfied with the low standard of vehicle distribution, and want to see a viable rail option alongside a more consolidated market of car carriers. In this special report, in collaboration with India’s Logistics Times, Ramesh Kumar talks to the industry’s major players to uncover the latest progress and hiccups for one of the sector’s most exciting markets. Additional reporting by Ritwik Sinha.

There is an air of disbelief among many Indian OEMs and policy wonks. Sales and production are tracking well ahead of the Society of Indian Automotive Manufacturers’ (SIAM) growth projection of 12-13% for car sales in the financial year 2010-11. Anticipation is now for India to sustain more than 20% growth by the time the curtain comes down at the end of the year, which will mean crossing the 2m unit threshold for the first time. Total passenger car production stood at 1.8m in 2009-2010. By 2015-2016, it is projected to reach 4-5m units per year. 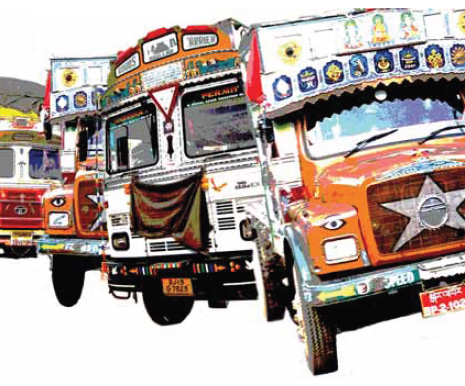 But a lurking challenge remains in the form of getting the finished products into the hands of potential buyers. Randhir Singh (RS) Kalsi, executive officer for sales and logistics at India’s top carmaker Maruti Suzuki, oversees around 100,000 vehicles currently leaving Maruti’s plants every month. “Today, 4,000 vehicles leave our factory gates every day. Soon, it will be 6,000 plus,” he says nonchalantly, but admits to a variety of challenges, including infrastructure, availability and quality of fleet and drivers, as well as an absence of professional management at the transporters level. (See box: ‘Manning logistics at Maruti’). The problems are familiar to most manufacturers and logistics providers in the country. “Road infrastructure is poor and not well maintained and what is worse, roads are always congested with heavy traffic across the country,” says NYK Line India director, Koichi Nakajima.

India is almost entirely dependant on roads for the movement of goods, with about 98% of finished vehicles moving by truck. And the country’s record in this arena is nothing to boast about. The latest McKinsey report notes that “India’s logistics infrastructure is insufficient, ill-equipped and ill-designed to support the expected growth rates of 7-8% over the next decade.” Freight traffic is expected to more than double in this time. The report suggests India has the opportunity to address this issue, as most of the planned infrastructure capacity has yet to be built.

But there are doubts over whether infrastructure investment will keep up with traffic. “Even in the unlikely scenario that the Ministry of Transport and Highway were to build 20km of road every day, it would only create 7,300km of road every year,” says Ajay Mittal, chairman of Indian logistics provider Arshita International. “If each car requires 10 meters space to run on the roads, India would only be able to accommodate 730,000 additional cars per year under optimal traffic conditions while it actually needs to accommodate three to four times more.”

The road remains the only way to go
Despite these hiccups, road dominance in finished vehicle movement is unlikely to taper off. Anand Venkateswaran, general manager for sales logistics at Hyundai Motors India, India’s second largest carmaker, sees few intermodal options in the near term. “Roads and car carriers will continue to dominate the movement of cars from our plant across India. We do not see costal shipping as an alternative in a five-year time plan due to congestion in ports. Rail as an alternative to road might exist in the south-north and south-east routes but its share is unlikely to exceed 10-15% due to the unfavourable freight structure and rigid policies of railways.” (See box on p38, ‘Railways cranks up’).

But there are optimists as well. Marc Nassif, country manager and managing director, Renault India: “We agree that it is at 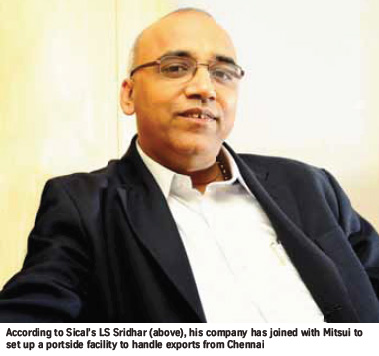 present a real challenge. However, with the pace at which infrastructure is being put in place, we are confident the government will keep pushing hard to keep pace with industrial growth and enhance efficiency of transportation.” SIAM, the automotive industry’s lobby group, recognises that its growth ambitions cannot rely only on road transport. “We are examining alternative water and rail-based solutions,” says Sugato Sen, the group’s senior director. Maruti has made a foray in this direction with the assistance of 3PL-firm Adani Logistics. According to Adani’s Umesh Bhanot, vice president-business development, finished vehicles from Maruti’s Manesar plant in northern India were moved on rail to Mundra, on the west coast, in containers and thereon they were transported by sea to Kochi port in southern India on a trial basis.

Adani Logistics sees a bright future in the intermodal segment given the rising volume of carmakers. Mercurio Pallia Logistics, a joint venture between the Italian-based Gruppo Mercurio with its Indian partner, Pallia, is conducting a feasibility study on coastal and rail solutions, says Vipul Nanda, chairman and Indian director of the company. “Moving Chennai to Kolkota to service via coastal is also on the cards,” he adds.

Adani is a port operator as well, managing Maruti’s exports to Europe and the Americas with its dedicated ro-ro facility at Mundra. Such facilities are rare in India. NYK Line India handles vehicle exports from Jawaharlal Nehru Port in Mumbai as well as Mundra. According to NYK Line India’s Nakajima, Mumbai port is “old and poor”, while Chennai port can be “dirty” because of coal handling.

But despite the coal, Chennai stands out as an export option with so many carmakers setting up shop in the region. Sical Logistics has now joined hands with Mitsui to set up a port side facility to handle exports from Chennai. According to LS Sridhar, Sical’s managing director, the yard construction is already complete.

as well. But it is also a way to reduce the truckers’ dominance and in the process bring down the cost of logistic operations for OEMs. Rail has many proponents in India. Indian Railways wants to increase its earning potential, while OEMs are eager to reach destinations faster and with less damage. Hyundai’s Anand does not mince words about today’s poor standards: “The handling of cars by the crew during loading and unloading operations, and during transhipments on road sides does need a great degree of improvement. Added to this the quality of the hardware leads to a high percentage of damage ratio and total non-adherence to safety norms.”

Trailers of all different sizes
Among the issues contributing to high damage rates is the low standards of carrier equipment. Recently, European 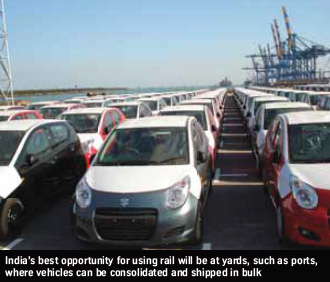 manufacturers such as Rolfo and Lohr have entered with better designs, but their costs are prohibitive compared to local manufacturers. Maruti’s Kalsi is blunt: “These foreign vehicles are over-designed and 200% more expensive!” Philippe Fortmann, managing director of Lohr India, believes the investment is necessary, and that current transporters often flaunt regulations. “We are willing to give the finished vehicle logistic industry the global advantages of increased capacity through quality design, components and user-friendly equipment for drivers. But the main barrier so far has been the lack of rules on dimensions which results in 95% of the car-carriers in India being illegal in three ways: length, height and weight.”

Shivam Arren, CEO, Kailash Rolfo India, offers another insight: “It is unfortunate that vehicle transportation is not the most technologically driven industry. It is largely driven by economic returns and cost factors, even if that means transporting vehicles in non-standard roadside trailers. “The result is that a substantial portion of cars delivered through these non-standard, non-conforming products get damaged before reaching the dealerships and have to be repaired before being given to the end customer.”

Hyundai’s Anand agrees on the need for better carrier standards, calling for “superior trailer designs” to mitigate the number of losses caused by side turns of long trailers with poor sideward tipping stability.

Current regulations are still ambivalent on whether the actual size of car carriers should be 18.75 meters or 22 meters. Meanwhile, both sizes ply on the Indian roads; and while there is a similar variance of length between certain EU countries, the difference is that in India many fleet owners violate local laws by squeezing in more vehicles. While some OEMs turn a blind eye, others insist on a strict adherence to local regulations. Arren is categorical that 22 meters trailers do not suit Indian road conditions.

Mature logistics: using regional stockyards
Indian OEMs are gradually waking up to the need for having stockyards to meet demand quicker. Potential buyers, particularly for affordable entry level cars, expect to walk off dealer lots with their car. But few dealers have the space to carry such high inventory, says TCI Supply Solutions CEO Jasjit Sethi. “No single auto dealer has the wherewithal to hold the plethora of models and colours of Maruti. So Maruti, as a leader, is moving in to set up stock yards.”

Among the locations Maruti has chosen for such yards is Bangalore, where a 200-acre plot will stock and release vehicles to dealers in the vicinity in the shortest possible time to satisfy the potential buyer. Other OEMs might chip in once their volumes warrant a dedicated stock yard (Mahindra & Mahindra already runs several of its own). A few 3PLs are gearing up for regional stock yards to help carmakers in this arena, although it is yet to be determined whether the OEMs will manage them or outsource them. “We are ready to chip in to stockyard management. Our Italian partner has the specialised skills,” claims Mercurio Pallia’s Nanda. The Indian automotive industry is at an inflection point, as global carmakers zero in on it as a sales and production hub. SIAM and others hope to come out as a winner, perhaps taking a leaf from Indian’s successful emergence in the infotech arena. But logistics challenges cannot be ignored as the market develops.