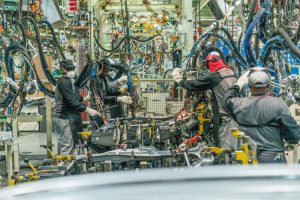 Toyota was forced to shut its manufacturing plant near Durban in South Africa this week after a massive storm hit the region resulting in ‘unprecedented flooding’.

In a statement on Tuesday, following the storm, Andrew Kirby, president and CEO of Toyota South Africa Motors, confirmed that there was “significant damage” to the Prospecton facility, including the buildings, equipment and vehicles on the line.

“Our first priority was to ensure the safety of our employees and I’m pleased to report that there were no injuries resulting from this morning’s downpour.

“Production for now has been halted at the facility for the rest of today and tomorrow to enable us to quantify the extent of the damage – we’ll then reassess the situation again on Thursday [October 12th] and decide if we can resume normal manufacturing,” Kirby said.

At an investment announcement last year, Toyota declared the plant as the second biggest global manufacturer of Hilux and Fortuner models, behind Toyota Motors Thailand, and the only facility charged with building Hilux models that meet Euro 6 regulatory demands

According to data from the National Association of Automobile Manufacturers of South Africa (Naamsa) almost 47,000 Toyota vehicles were exported from South Africa last year.