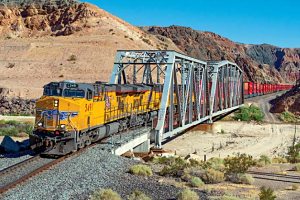 A rail car carrying spent lithium-ion batteries burst into flames in the US city of Houston on Sunday. No one was injured.

An official from the Pipeline and Hazardous Materials Safety Administration (PHMSA) within the Department of Transportation told Automotive Logistics that both it and the Federal Railroad Administration were investigating the incident.

A spokesperson for Union Pacific, the rail provider, told Automotive Logistics the container was on its way to a recycling facility in Los Angeles, having originated in Atlanta.

“Yesterday's incident did not cause significant delays for Union Pacific,” said the spokesperson.

“The fire was extinguished within approximately two hours of starting and was limited to one railcar. Once the fire was put out and it was safe to proceed, the train moved on to a nearby rail yard where the damaged car was set out and the train was able to continue on its route.”

The news will concern those in the growing electric vehicle market and any supply chain operations that support it, as such vehicles are largely powered by lithium-ion batteries.

It is not yet clear who owned the batteries in question or what application they had been used in.