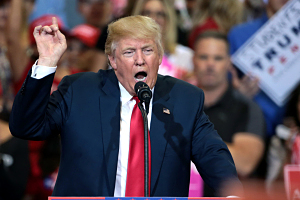 Further criticism has been voiced over President Donald Trump’s plans to impose import tariffs of 25% on steel and 10% on aluminium from other countries, except Nafta partners Canada and Mexico.

Following widespread condemnation of the plans last week – which saw concerns raised by groups such as the Motor & Equipment Manufacturers Association (Mema), Global Automakers, the American International Automobile Dealers Association (Aiada), Hyundai, Honda, Toyota, BMW and Ford – commentators have warned of a global trade war developing, while the European Commission is already threatening to levy duties on US imports of products as diverse as Harley-Davidson motorcycles, oranges, tobacco and bourbon whiskey.

South Korea, meanwhile – a major producer of cars and steel – is considering filing a complaint with the World Trade Organization over the steel tariffs, said trade minister Paik Un-gyu.

Various automotive sector bodies have pointed out that the measures, which are due to take effect from March 23rd, will put the industry’s competitiveness and economic health at risk, as well as the security of jobs within it.

Commenting further after President Trump’s plans were announced, Mema said: “[The] tariffs will be detrimental to the jobs that the motor vehicle parts supplier industry created. While we support the administration’s focus on strong domestic steel and aluminium markets, tariffs will limit access to necessary specialty products, raise the cost of motor vehicles to consumers, and impair the industry’s ability to successfully compete globally.”

“While the exclusion of Canada and Mexico may help mitigate negative effects in the short term, tariffs on steel and aluminium would hurt the largest sector of manufacturing jobs in the US, putting the well-being of many Americans, and the nation’s economic security, at risk,” added the assocation.

Echoing Mema’s arguments, John Bozzella, who heads Global Automakers, a body that represents foreign car markets in the US, said: “A tariff is a tax that will result in higher prices that consumers will ultimately bear. Exemptions will not address the fundamental problems tariffs will create for US car and truck manufacturing.”

President Trump is imposing the duties on the grounds of national security. Announcing his decision, he said economic vitality, growth and prosperity at home were “absolutely necessary for American power and influence abroad”.