In a position paper released this week, the UK government has proposed an interim arrangement after the Brexit cut-off date in 2019 that would see the country continue to operate under the EU Customs Union until a new trade deal between the parties is negotiated.

“The approaches we are setting out today will benefit both the EU and UK and avoid a cliff-edge for businesses and individuals on both sides,” said secretary of state for exiting the EU, David Davis (pictured). 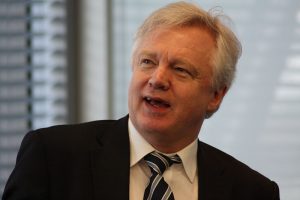 A large number of companies and industry bodies have been calling for interim arrangements to be made with the EU as soon as possible in order to provide investors with certainty that goods will continue to flow smoothly after March 2019.

Michel Barnier, Europe’s chief negotiator for Brexit, was quick to remind UK lawmakers on Twitter that issues such as citizens’ rights, the Irish border and the UK’s exit bill were priorities ahead of any discussions on future trading arrangements between the parties.

Amongst those pushing for a transitional arrangement to be made are the Society of Motor Manufacturers and Traders (SMMT), the British International Freight Association (BIFA), and the Freight Transport Association (FTA).

“BIFA policy ever since the 2016 referendum has favoured retaining something as close to the Single Market as possible,” said Robert Keen, director general of the UK freight forwarding and logistics company trade association.

“In reality, certainly since the 2017 general election, this has meant remaining in the Customs Union or something as close to it as possible, preferably in the long run but certainly during any implementation period, after the UK leaves the EU.”

One, said BIFA, was highly streamlined, keeping the additional requirements for EU-UK trade to a minimum “but which from reading the document does imply that some form of customs declaration will be required”.

The second, which BIFA says is more closely aligned with its own current policy, would remove the need for customs processes at the border, although there would be a need to align UK and EU customs procedures.

“To be in & out of the Customs Union & "invisible borders" is a fantasy. First need to secure citizens rights & a financial settlement,” read Verhofstadt’s message on the social media platform.

Meanwhile, Mike Hawes, CEO of the SMMT, said it was encouraging that government recognised the need for interim arrangements but added that in order to maintain frictionless trade and ensure business only had to adjust to one change, the country must retain membership of the Customs Union and full participation in the Single Market.

“Any other arrangement risks additional administration, delays and costs, undermining the competitiveness of UK exporters and increasing the costs of imports,” he stated. “We will continue to work with government to try and avoid such an outcome.”