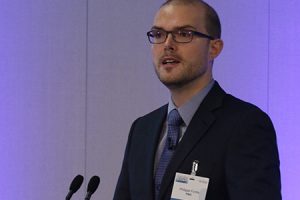 Electric vehicles will replace the internal combustion engine as the dominant vehicle type by 2030 in a shift expected to have substantial implications for the supply chain.

Speaking at the first Automotive Logistics UK summit yesterday (October 6th), Philippe Funda, lead analyst for the EU, Middle East and Africa at forecasting consultancy PWC Autofacts, said that while only a small part of sales and production at present, electric vehicles would soon gain significant market share as a result of the Paris climate agreement adopted in December and ratified this past week by the European Parliament.

Under the deal, 195 countries have agreed to a long-term goal of keeping the increase in global average temperature to well below 2°C and to carbon dioxide (CO2) neutrality.

“The agreement doesn’t only take into account vehicle sales, it takes into account the entire global car parc,” Funda said.

Despite a slow start, hybrid cars are expected to gain momentum beyond 2020 but will remain a transitory technology as the industry heads toward full electrification, which will become the dominant technology in the long term, said Funda. By 2030, he suggested, pure electric vehicles are expected to make up 40% of market share in the top three markets of Europe, North America and China.

The advent of pure electric cars will, however, change the supply chain in a bigger way, given the differences inherent in these vehicles.

In a separate presentation, Paul Nieuwenhuis, senior lecturer – logistics and operations management at Cardiff Business School, made a similar point about certain parts becoming redundant over time, referring to a “potential transformation of the total automotive value chain over time”.

“They are tiny volumes, and it’s not all full assembly of course, but these markets are speeding up,” he noted.

Expectations are for annual production capacity in the region, including South Africa, to grow from 3.7m units in 2015 to 4.4m vehicles by 2022. While small in volume numbers, the growth rate of 19% compares favourably with other regions across the same timeframe, including South America, which he forecast would grow by 10%, and Asia Pacific (13%). EU production capacity, meanwhile, was forecast to grow by 5.8% in the same period.

South Africa is already well integrated into the global automotive industry, not least as an important export base for European carmakers including Volkswagen, Mercedes-Benz and BMW.

Carmakers are also investing more in north Africa and in Iran. Renault Nissan has been expanding its plant in Tangier, Morocco, while PSA is planning a Moroccan plant by 2019. This month, Renault finalised plans for a new joint venture in Iran, as has PSA.