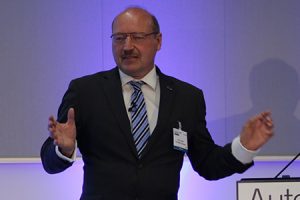 Ford Europe’s purchasing boss Alan Draper has called on Britain to preserve existing trade arrangements across the EU and EU Customs Union, which includes Turkey, as the government heads towards key negotiations in leaving the union.

“A zero-tariff regime to and from the UK is the preferred solution that I think all the OEMs and most of the supply base would like,” said Draper, who is director of purchasing for Europe and of global team value management at Ford and was speaking at the inaugural Automotive Logistics UK summit in London.

Ford has a significant presence in the UK, not only as the best selling car and light commercial vehicle brand, but also as a producer of more than 1.5m engines annually at its plants in Dagenham, east of London, and Bridgend, Wales.

Importantly, the company does not build finished vehicles in the country any more, importing the majority of cars and vans without tariffs from its plants in the EU including Germany, Spain and Romania.

Preserving trade arrangements with Turkey is also crucial for Ford. As a member of the customs union, Turkey can export to the EU without taxes, and Ford sources its market leading Transit vans from its joint venture Ford Otosan plant in Koceali. Ford Otosan exported nearly 90,000 vehicles to the UK in 2015, according to the company.

Draper, a 30-year Ford veteran, also highlighted the potential loss of the EU’s foreign trade agreements, which cover around 50 countries outside the bloc, as a concern and called for a protection of the rates from the existing agreements. Ford exports its engines to plants around the world and also imports vehicles from overseas plants including North America, South Africa and India.

Recent comments by UK prime minister Theresa May outlining a desire to have full control of immigration go against the ‘four freedoms’ of the region – free movement of goods, capital, services and people – and could put negotiations around the UK’s access to the European single market at risk, said Draper.

For vehicle manufacturers, a ‘hard exit’ from the economic zone could see trade tariffs imposed on goods, for example – a risk highlighted by Nissan and Jaguar Land Rover in recent weeks.

Draper said he expected an agreement to be reached that would be different to other arrangements between the EU and non-EU members like Norway, Switzerland and Turkey. “This EU-UK free-trade agreement, which would be a unique agreement just for the UK with totally different conditions to any existing agreement, is probably where this will end up,” he predicted.

Risks from barriers to goods and serviceHowever, a failure to reach an effective deal could lead to a hard Brexit that not only increased the barriers in moving goods but also restricted services such as financing. Ford’s finance division, for example, operates across the whole of Europe out of its UK base, and so Draper highlighted the retention of passporting rights as a priority. Given the importance of the UK’s financial services sector, banks and insurance companies in the country are also lobbying to retain this access. Draper acknowledged that negotiating access for services would probably be “more complex than for goods”.

On the issue of equivalents in vehicle conformity and regulation – an area cited as a risk should the UK diverge from EU standards – Draper said he was “confident” it was an issue the parties would come to agreement on.

Nevertheless, he was frank in his assessment that the impact from Brexit would be significant, both in the uncertainty around negotiations – which is leading some companies to hold back from investment – and in the eventual agreements.

“The Brexit uncertainty will affect both exchange rates and the industry very significantly,” added Draper.

Sterling, having initially weakened on the back of the Brexit vote in June, has this week touched a new 31-year low against the dollar.

While the weak currency can help UK-built products to be more competitive overseas, the price of imports rises as the pound falls. That affects not only the 440,000 or so vehicles Ford imports into the country each year, but also inputs for engine production.

According to Draper’s estimates, Ford’s two British engine plants source 40%-plus of their material spend within the country, importing the rest. He pointed to particular rises in the price of oil-derived products and raw materials purchased in dollars, including plastic.

Draper also highlighted upcoming elections over the next year in Italy, France and Germany as an element of instability in the puzzle, as these governments will be a key component in the negotiations for Britain’s EU exit.

“The French and German elections could make this thing difficult to get running through next year,” he said.

Another key deadline for government may be the UK election, currently set for 2020.

Draper told delegates that Ford had been in dialogue with the government, including with those attending the ruling Conservative party conference last weekend. Initial feedback has been “positive”, he said, but it was still too soon to say what direction Brexit negotiations would take.

A video recording of Alan Draper’s presentation and all the other sessions from Automotive Logistics UK can be viewed here.