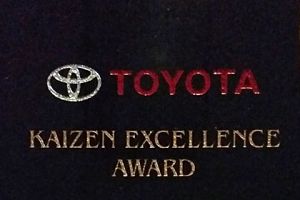 Union Pacific has been awarded the Toyota Logistics Excellence award in customer service for the ninth consecutive year, while also becoming the first railroad company to receive the Kaizen award for continuous improvement.

"It is also a privilege to receive Toyota's Logistics Excellence Award in Customer Service year after year, as it reflects our unwavering commitment to provide an excellent customer experience."

The Kaizen award was specifically for Union Pacific’s use of Toyota’s problem-solving process to ensure damage-free loading at the Benicia, California, auto ramp.

Oceanex, which provides intermodal transport services to the province of Newfoundland and Labrador, had received the award for the previous two years.

Another rail provider, BNSF, recently announced that it too had been recognised by the OEM, receiving the President’s Award for the third year running and also the award for on-time performance as well as quality.