Valmet to produce next generation of Mercedes-Benz compacts 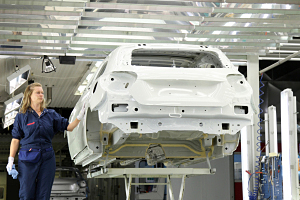 Daimler has confirmed that the next generation of it’s compact A-class model will continue to be produced by contract manufacturer Valmet in Finland.

The current generation of the A-Class has been produced at the plant in Uusikaupunki since 2013 and in February production of the Mercedes-Benz GLC SUV began there.

Daimler has reorganised global production to create more capacity for SUVs. In 2015 it started using specialised vehicle maker, AM General, in Mishawaka, Indiana to build the R-class for export to China, freeing up space for SUV output at Vance, Alabama.

The previous A-class order with Valmet comprised a total of more than 100,000 units through 2016. This contract has since been extended to 2017.

The GLC order has a comparable volume. Both vehicles are built on the same assembly line.

In February Valmet, which received the Daimler Supplier Award 2016, said it would hire 1,000 new carbuilders at the site this year.

Daimler’s Rastatt plant in Germany remains the ‘lead plant’ for the group’s compact car production, while the vehicle class is also produced at the company’s Hungary plant and the BBAC site in Beijing.

As part of its partnership with the Renault-Nissan Alliance, a joint plant in Aguascalientes, Mexico, is also currently under construction.

In January rival carmaker, BMW, said it would use VDL Nedcar’s contract manufacturing plant in the Netherlands to assemble the BMW X1 from August.