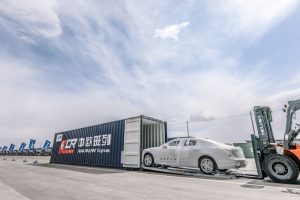 The shipment, which will be followed by a regular service according to Volvo, is a significant development in turning the Geely-owned Swedish carmaker’s industrial base in China into a global export hub.

The route is part of China’s so-called One Belt, One Road economic and trade initiative, which seeks to improve trade links between China, Asia, Europe and the Middle East.

According to a statement by Volvo, the rail journey reduces the transit time from China to Europe by about two-thirds compared to traditional ro-ro shipping.

The carmaker also claimed that using rail over the same distances reduces CO2 emissions by around a third compared to shipping. From Daqing, in the far north of China, the savings are even greater since using rail eliminates inland transport distances to ports, according to Volvo.

According to a source close to the projects, the shipment that is arriving this week in Zeebrugge includes just a few S90 models in a container as a test. However, regular block train shipments from Daqing are scheduled to begin in the coming weeks.

According to Volvo, block trains will carry 225 vehicles in specialised containers from China to Europe, which will each hold three cars secured at different angles to maximise space and reduce damage.

Initially the service will run weekly with the prospect of increasing in frequency as volume demand grows, according to Volvo.

The shipment that will arrive in Belgium this week is also scheduled to coincide with a visit to Belgium by China’s prime minister, Li Keqiang, who will also meet this week with Volvo Cars’ chairman Li Shufu and chief executive Håkan Samuelsson.

Volvo Cars began production of the S90 series at its plant in Daqing last November. The carmaker announced then that it would use Daqing for exports of the model as part of an overall strategy to turn China into its global manufacturing and export hub. Volvo said it would eventually phase out S90 production at its plant in Torslanda, near Gothenburg in Sweden, and replace it with other models.

Later this year, a new plant in Luqiao, south of Shanghai, will start building Lynk & Co models – a new brand from Geely – and later the Volvo S40 sedan, vehicles that are also set to be exported. Volvo has also announced that it will build its first fully electric vehicle in Luqiao.

The Europe-China railway has enjoyed increasing usage in recent years, including as part of China’s ‘One Belt, One Road’ initiative.

According to Zhang Xiaodong, professor of traffic and transportation at Beijing Jiao Tong University, there were 1,700 trains between China and Europe in 2016, of which more than 570 came from Europe. By 2020, the Chinese government and railways anticipate the total will rise to 5,000 trains.

Chinese news source Xinhuanet reported figures from China Railway revealing that Sino-European freight trains haved increased by 158% in the first four months of this year compared with the same period last year. China Railway reported around 1,000 round trip journeys in 2016.

While there have been numerous reports of trials and spot shipments of finished vehicles moving by rail from Europe to China, notably from Germany to Chongqing, in western China, there are currently no regular services. Services from China to Europe have been rarer, although various Japanese carmakers, including Mazda, have used the service to move vehicles to Russia and even to Europe at various times over the past decade.

That said, the China-Europe rail link through Russia and Central Asia, which is a central part of the One Belt, One Road trade initiative, has seen a fast rise in services over the past two years. Demand for rail freight is also growing in the automotive sector as customers look to cut ocean transport times for certain cargo without incurring high air freight costs.

Following a major international conference, the Chinese government recently announced investment of up to $124 billion in the One Belt, One Road initiative. Major logistics providers including DHL, Gefco and Kerry Logistics have all revealed new or increased services that include automotive freight.