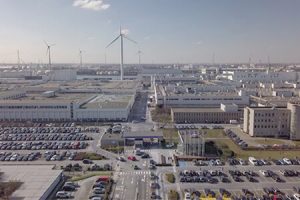 Lynk & Co cars will be produced for the first time in Europe at Volvo’s plant in Ghent, Belgium, from late 2019, signifying closer collaboration between two companies within the Zhejiang Geely Holding group of China.

“By providing Lynk & Co with production capacity at its Ghent plant, Volvo Cars is backing the expansion of the new car brand in Europe and further diversifying its business,” the Swedish carmaker said.

Håkan Samuelsson, president and CEO of Volvo, added: “We see a big potential for this new brand entering the European market and we are happy to give Lynk & Co the support of Volvo’s technological and industrial expertise.”

Lynk & Co, which has focused on the Chinese market to date, said it would initially manufacture its new range of hybrid derivatives.

“It makes absolute sense that we commence European production for Lynk & Co alongside a brand with the absolute trust mark and global recognition in safety, quality, design and international appeal,” said Lynk & Co’s senior vice-president, Alain Visser. “We could not wish for a better start in our home market,” he added, referring to the company’s cars being designed and engineered in Gothenburg, Sweden.

A Volvo spokesperson told Automotive Logistics the decision to produce Lynk & Co cars in Ghent would lead to additional investment on top of the “already considerable” amount made to convert the factory into a compact modular architecture (CMA) plant.

Though the company would not quantify the level of investment involved, the spokesperson added: “Over the last months we have transformed the Ghent plant into a global export hub for CMA-based cars, including an 8,000 sq.m addition to the body shop, along with 363 robots. The investments made will ensure that we have the capacity needed to build the Lynk & Co cars.”

Volvo said joint production with Lynk & Co would also have a positive effect on cost levels, and employment and production volumes at the 5,000-employee Ghent plant, as well as generating economies of scale relating to CMA use by both companies.

In terms of the supply chain implications, the Volvo spokesperson said it was too early to discuss how the inbound supply of parts for Lynk & Co would be organised but added that there were no plans to utilise the existing rail service, which Volvo has with Changjiu for shipments of S90 vehicles to Zeebrugge from Dajing, for delivery of parts.

Last year Volvo acquired a 30% stake in Lynk & Co, a volume brand launched by Zhejiang Geely Holding in 2016. Lynk & Co is endeavouring to differentiate itself by offering online sales along with a sharing and subscription usage model.

A company spokesman told Automotive Logistics: “When Lynk & Co is available in Europe, the subscription method will be available to potential customers and so will the option to buy outright, should the customer desire. The exact mechanisms and costs involved in the purchasing of the car will be revealed in due course.”

The Ghent plant currently builds Volvo’s XC40 SUV, the V40 and V40 cross-country hatchbacks and the S60 sedan. It will also be making the new V60 five-door, mid-size estate.