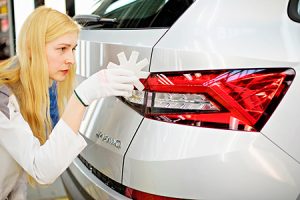 Volkswagen’s division in Russia has started local production of the Skoda Kodiaq SUV at the Gorky plant owned by Russian vehicle-maker Gaz Group in Nizhny Novgorod.

Michael Oeljeklaus, head of production and logistics at Škoda Auto, which is owned by VW, said the move was an important step in implementation of the brand’s long-term development strategy in Russia.

“Local production has such undeniable advantages as reduced vehicle delivery time or the opportunities for a rapid increase in production volumes,” he said.

The Kodiaq was introduced to the Russian market in June last year and sold around 1,500 by the end of 2017, but was previously imported from Škoda’s plant in Kvasiny, Czech Republic. Now, however, the vehicles for the Russian market are being built up from the ground at the Gaz plant.

VW signed an agreement in 2011 with Gaz for local production of VW and Skoda vehicles in Russia. The Skoda Octavia and Yeti are already made at the plant in Nizhny Novgorod, along with the VW Jetta. The addition of the Kodiaq involved an investment of €87.5m ($107.8m) and 18 months of preparation. In June last year, the original agreement signed in 2011 was extended to 2025.

“The start of the Kodiaq’s local production is opening a new page in the history of Škoda’s development in Russia,” said Dr Oliver Grünberg, technical director of Volkswagen Group Rus. “We used the investments to prepare the production site and purchase new equipment. A recognisable figure out of the overall investment went into quality control. All this will allow us to produce cars fulfilling the company’s highest standards and requirements.”