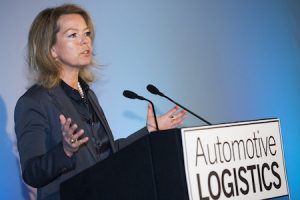 A big part of Volkswagen’s ambitious target to reduce emissions by 25% across its business by 2018 will come from its logistics strategy, the carmaker’s head of outbound logistics has revealed. But VW does not anticipate moving volumes from ocean to road when sulphur emissions restrictions come in for much of northern European shipping, although there are some concerns for compliance costs and fuel supply.

Speaking in the opening session of this week’s Automotive Logistics Europe conference held in Bonn, Germany, Andrea Eck, general manager of outbound logistics at the Volkswagen Group (pictured), said that logistics has always been focused on the reduction of lead times and cost, as well as the maintenance of quality. Now logistics is increasingly also about reducing the carbon footprint. The company is taking a three-pronged tool to the problem.

“First we need to know how much we are emitting and how we track this,” she said. “It is not easy, as you can imagine, to do this for 106 plants worldwide. You can’t start with all of them at the same time, so we are taking different steps but the same standards will be implemented worldwide in the end.”

“The third is important – the coaching and communication of these priorities to our workforce. They need to be aware what it means when we are talking about the reduction of 25% of emissions.”Secondly the company is looking to develop measures for improvement, “not to invent the wheel a second time,” said Eck, instead thinking about optimisation and what the company can develop together with its suppliers and service providers.

Amongst the practical things being done Eck said the company was focusing on an optimal average in the use of inbound transport by looking at better use of cross docks, milkruns and direct runs between supplier and plant.

It is also looking at consolidation of different logistics functions in one location enabling a better utilization of modes, including truck, train and waterway, as seen in VW’s recently completed multimodal complex at the inland port located next to its Wolfsburg plant in Germany.

“There is a packaging station there, storage for cars and a port,” Eck explained. “These are three functions together and we started to optimize the network in the transport of cars and reduce the distance and therefore the emissions. We also built a packaging station, where we are packaging parts for overseas companies.”

The facility includes state of the art logistics facilities that are built according to the latest green standards.

The company is also making reductions on rail routes for inbound and outbound moves in Germany and has reported savings of 10,000 tonnes of CO2 by using DB Schenker Rail’s EcoPlus service, which derives energy for traction from renewable sources (and is shared by other carmakers, including Audi and BMW).

And it is not just about CO2. In a welcome acknowledgement of the pressures VW’s ocean forwarders are facing when the sulphur emission control areas (SECAs) come into force in the North and Baltic seas at the beginning of next year, Eck said that VW was eager to work with its providers toward reducing the sulphur dioxide (SOx) emissions. She ruled out any major cancellation of shipping routes or shifting more of this volume to other modes.

“Of course we could stop [short sea] shipments but this is not the solution,” she said. “We don’t want to close shipping lanes.”

Highlighting the efforts being made by the ocean forwarders to look for alternatives and new technologies, Eck picked up on the challenges faced by the adoption of liquefied natural gas (LNG), a long-term solution that many are now looking at.

“There is a serious problem in terms of infrastructure,” she acknowledged. “There is not enough terminal infrastructure at the ports where you can tank LNG. So on the one side we say, of course, we will support legislation to reduce this, but there needs to be support from the other side. Because finally, at the end of the day for us as an OEM, these SECA regulations will mean our costs increase. This is a fact and we can do nothing about that. The question is now how we can work together to improve the infrastructure because at the moment it is under developed.”

To qualify the company’s commitment Eck pointed out that VW was the first German OEM to join the Clean Shipping Network, an association of cargo owners, which it did at the end of last year. VW is now using the Clean Shipping Index (CSI) assessment tool to analyse and reduce the environmental impact of marine shipment.

“We did this to support our partners and to have an influence on the regulations," said Eck. "We think this is the right way to show that we want to contribute to reduce the emissions.”

Finally, while Eck acknowledged that reducing carbon emissions was not yet playing a role in its supplier and logistics purchasing, she predicted that it eventually would. “We would eventually need transparency from all our suppliers and logistics providers on their emissions, starting from their own sourcing,” she said. “That is the only way that we could really have the full supply chain view.”