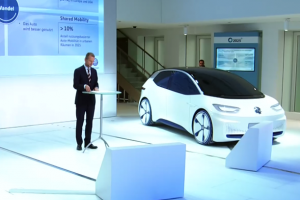 Volkswagen has fleshed out the major strategy for its namesake brand, having already announced a restructuring plan for its German plants last week.

The Transform 2025+ plan, as it has been named, includes an initial focus on SUV vehicles, and an electric vehicle “offensive” from the end of the decade.

The company announced a major restructuring last week, including the elimination of 30,000 jobs as well as heavy investment into its German plants. Of the 30,000 global jobs number, 23,000 will be in Germany, although there will be no redundancies.

Herbert Diess, chairman of the company’s board of management (pictured) said last week: “In all plants, both in car plants and component producing plants, we are going to increase productivity by up to 25%. In other words we are building more cars with fewer people.”

In total €3.5 billion ($3.7 billion) will be invested as the existing German plants are redeveloped to be able to produce electric vehicles and components alongside conventionally driven vehicles.

This week the company also revealed plans to reduce the complexity of its products including a 30-60% reduction in variants for successor and new models. There will be 40% fewer platform variants, with eleven older ones being ceased, and a 30-40% reduction in drive variants.

“Lower complexity enables us to achieve higher productivity in production and economies of scale in purchasing,” said Diess.

The company plans to base all conventional vehicles on the modular cross-section box (MQB) platform going forward.

“The MQB is the backbone of the Volkswagen Group with around 80% of vehicles based on this platform.”

The electric cars will be based on the Modular Electrification Module (MEB) platform, which will also be used by other group brands. The company plans to have some local electric vehicle production in the US from 2021.

Last week's announcement also revealed that electric vehicles will be produced at the company’s Zwickhau and Wolfsburg plants in Germany. The MEB drive system will be assembled at Kassel, with Salzgitter providing MEB components and hosting a pilot plant for battery cells and cell modules.

SUVs firstIn recent years, SUV demand has experienced a turnaround. In the US sales are up by about 20% this year. VW has so far missed out on the phenomenon compared with some of the major players but it now plans to have a total of 19 SUV models in its portfolio by 2020, compared with just two today.

As a result of this strategy, the class of vehicle will make up between 30-35% of the company’s volumes in the US, Europe and China, more than double its current share of volumes.

Diess said the next phase would then follow: “From 2020 onwards, we will launch our large electric offensive. As a volume producer, we want to make a significant contribution to the breakthrough of the electric car: we are not targeting niche products but the heart of the car market.

“By 2025, we want to sell 1m electric cars per year and be the world market leader in electromobility. Our future electric cars are the new brand of Volkswagen,” he added.

The Volkswagen Group plans to have more than 30 pure electric vehicles on the market by 2025.

The company is still recovering from the 2015 VW diesel emissions scandal in the US. Last month a judge agreed on the proposed $15 billion settlement figure proposed by the company.

Diess admits that because of this VW is entering a significant phase of automotive history on the back foot. A phase that includes autonomous drive, connected vehicles, shared mobility and the increasing market share of electric cars.

“The image of our brand has suffered from the diesel crisis. Many people no longer trust us as they used to. It is therefore our main task to win back this trust as quickly as possible.”