Russia's Ministry of Transport is planning to introduce 3,000km of toll roads by the end of 2016 to generate revenue for wide-ranging improvements to the country's road network, but existing weight and route restrictions are posing problems for those transporting finished vehicles, something of which Polish carrier Adampol and its Russian Vectura subsidiary are well aware 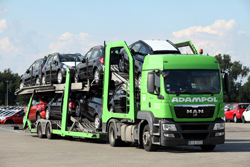 As is well documented, road quality in Russia still leaves a lot to be desired, especially in regions outside Moscow. In an effort to fund wide-ranging improvements, the Russian Ministry of Transport has announced that by the end of 2016 there will be 3,000km of toll roads. Routes include those from Moscow to St Petersburg, to Kazan in Tatarstan and to the Baltic coast road in the Russian enclave of Kaliningrad.

Polish car carrier Adampol, which has been active on the Russian market since 1990, has welcomed the efforts being made to improve Russia’s roads, but according to its commercial director, Barbara Koncewicz, the company has concerns over cost and the seasonal restrictions on routes that hit lead times and turnover.

Koncewicz said the company hopes the tolls will lead to improvements because of the often dire quality of the roads in country, especially in the outlying regions. She cited a recent quality test undertaken by Adampol’s Russian subsidiary, Vectura, on the M5 route between Samara and Ufa.

“A passenger car could be driven at a maximum speed of 20kph,” said Koncewicz. “So you can imagine how a truck driver needs to be careful transporting cars on a road full of holes.”

Details on the exact date for the tolls to take effect and the fees that will be charged are not yet known, so the company is isn’t clear on exactly how its vehicle logistics business will be affected. Depending on the final toll costs, Adampol will consult with its customers and include them in the final transport price, althought Koncewicz noted that the company sometimes takes on the road costs itself, as happened recently in Belarus when payment switched from collection at the toll gates to an electronic system of charging, leading to an increase of several euros more per trip.

“There was only slight confusion with the implementation of the special on-board units used for charging the fees in Belarus, which in turn negatively affected transport flexibility,” noted Koncewicz. “ We will carry out the existing contracts while keeping the current prices, unless those fees turn out to be very high. We discuss and find solutions together with our customers. Fortunately they do understand that keeping the rates stable in changing conditions is not easy.”

Restrictions around Moscow
In March this year, the Russian Ministry of Transport brought in a law that restricts the passage of 12 tonne trucks on the Moscow Ring Road (MKAD) during the day unless the correct permit is attained, though there are reports that these are difficult to obtain. This will not affect Adampol because it carries out international deliveries, but it will affect the Vectura subsidiary.

If the transport is carried out with a CEMT permit, and with a CMR document that shows that international transport is being performed, then there is no need to obtain any other authorisation. Russia has a complex system of road permits for foreign carriers. However, it concerns Vectura when it makes domestic distribution. At the moment, getting permits to enter routes including the MKAD, TTK (Third Ring Road) and CK (‘B’ Ring) takes a very long time.

The law stipulates that the permit should be issued 20 days after the relevant documents are submitted. In practice, however, the process takes longer because of the number of applicants awaiting the issue of the permits. Fortunately, once the permit is attained it remains in effect for one year.

Seasonal adjustments
The Russian Ministry of Transport also applies road and weight restrictions during certain times of the year, such as the spring when the condition of the roads are susceptible to melting. These are becoming an increasing problem for carriers moving vehicles across the country. This problem is compounded by the fact that carriers never know what to expect from the local governing bodies.

In previous years, the Ministry of Transport interdicted transport on almost all roads, apart from what was international transport. It did the same this year but following the intervention of the Ministry of Economic Development (MED) it decided that national roads would remain open. The MED stands firmly behind the belief that closing roads seriously hurts the economy. However, the MoT believes that the road pavements are not able to withstand the pressure of heavy loads following the melting snow and ice in the springtime. A significant part of the department’s financial resources go into reconstructing these roads.

“We believe that the fact that national roads remained open in 2013 is only a partial solution,” said Koncewicz. “In 80% of cases, carriers need to use local roads.”

Carmakers are likely to object to the need to change load weights because of the restrictions during these times of the year because it will increase the cost of transporting each car. The axis limit during the springtime in Russia is between three and six tonnes per axis, according to Koncewicz. However, some vehicle transporters are built in such a way that they would be unable to use certain roads even without a load.

Another solution would be to build regional logistics centres to where heavy loads could be delivered for onward transport on lighter trucks. But again this would increase costs, said Koncewicz.

“This would create unnecessary additional costs just because of the spring season,” she observed. “Lead times and prices of goods would increase, while the competitiveness of road transport compared to rail would decrease, which as we know, has recently expanded the number of services anyway and continues to do so.”

On the whole, Adampol welcomes the proposed introduction of fees for heavy goods vehicles using roads in Russia because the funds will go to construct better infrastructure, though transport costs and the price of goods transported will go up as a consequence. However, Koncewicz pointed out that the MoT’s solution would only have a positive effect if the roads were renewed first and government restrictions were lifted, which would shorten lead time and increase the amount of goods carriers could load in Russia.