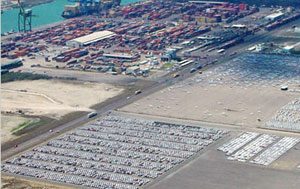 North American ports processor, Amports, will begin handling volumes of Kia vehicles for export through the Mexican port of Altamira on the Gulf coast this month. The vehicles are being made at Kia’s new plant in Pesqueria, Nuevo Leon, which recently began production of the Forte model.

Amports’ vehicle terminal has 174,000 sq.m of paved land and can store up to 8,500 vehicles. It also has a total of five berths. The terminal has pre-delivery and accessorisation facilities consisting of a 1,765 sq.m building for processing and repair, along with a specialised car wash and a body shop with one paint booth.

Vehicles being moved by road are delivered to any one of 20 truck carrier lanes at the port. The rail service is provided by Ferromex, with two rail spurs providing capacity for 24 multilevel railcars.

The company began operations at Altamira in 1997 with GM and has since handled volumes for Chrysler, Daimler, Navistar and Volkswagen. This year, it expects to handle 80,000–90,000 units. Last year, it handled around 84,000 vehicles.

Kia has had some issues to face in Mexico. Despite assembly starting at the new plant there last month, the state of Nuevo Leon has not delivered the infrastructure required to support full output from the plant, which was part of the contract it signed with Kia.

According to the Mexico News Daily, the state's new governor, Jaime Rodriguez Calderon, thinks the incentives provided by the former governor Rodrigo Medina were excessive and not legal. The dispute between Kia and the state government based on these shortcomings shows no signs of being resolved in the near future. Work on roads, water supply and the relocation of a gas pipeline has been delayed.

The plant's direct rail line has also been delayed and may not be open for another year or two. In the meantime, Kia will need to truck vehicles to another rail spur. Earlier this year, Roberto Zavala, country manager for WWL Mexico, said that the delay would cause further constraints on Mexico's ongoing shortage in car carriers.

Kia is aiming to make 100,000 vehicles at the plant in its first year of operations, with plans for annual production of 300,000 in the longer term.

Amports also has a facility at the Mexican port of Lázaro Cárdenas on the Pacific coast. The terminal consists of a 286,000 sq.m storage yard with capacity for 14,000 vehicles. There is 58,000 sq.m available for future development. However, following a legal battle with domestic operator SSA Mexico in 2014, which is contesting Amports' exclusive presence there, the company only succeeded in gaining a two-year extension to its terminal operation.

That was in 2014, and in May this year, SSA signed a concession to operate the Terminal Especializada de Automóviles (TEA) car terminal at Lázaro Cárdenas. The move marks the end of the dispute. SSA plans to invest $56m as part of a first phase of development that will see construction of an initial 80,000 sq.m site begin in early July and operations starting within 17 months.

Amports originally invested $5m in infrastructure and security at the terminal.

Amports was taken over by private equity firm Lincolnshire Management in 2014.