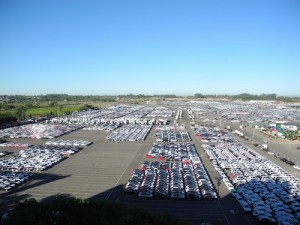 Carmakers exporting vehicles to Argentina are facing restrictions on the number of vehicles they can send to the country in the early part of 2014. The Argentine government is looking to cut imports by 27.5% based on volumes in 2013 because of a perceived imbalance in automotive trade.

According to the government, three out of every five vehicles sold in Argentina is an import.

Toyota is exempt from the restrictions because it builds its Hilux model in Argentina, as well as Brazil.

Figures released by the Argentine association of automobile producers (Adefa), in December last year show that the domestic industry experienced a decline of 27.8% from November and a decrease of 26.4% compared to the same month in 2012.

Automotive terminals recorded a decrease in shipments abroad of 40% in December over the same month of 2012, accounting for 28,872 units, compared to 39,705 that were sold to various markets a year ago. The figure was down more than 29% compared to 33,733 units exported in November last year.

The drop in exports, now combined with the responding restrictions imposed by the Argentine government, is likely to have an impact on car carriers using the Mercosur trade lanes, including Eukor and NYK Line.

A spokesperson for Eukor would only say that the company was monitoring the situation closely, but that it would not comment further as the situation was far beyond its control as a carrier, adding stoically that trade barriers represent nothing new in the Mercosur region.

Back in 2012 the Argentine government elected to suspend the Bilateral Economic Agreement 55, signed between the Mercosur trading partners and Mexico, for three years. As well as Brazil the Mercosur group includes Argentina, Paraguay and Uruguay.

Producers of vehicles in Mexico were faced with a 35% import tariff, while taxes on parts and components saw increases between 16% and 18%.

• In other news this week, Mexico's economic ministry has published quotas for the export of new light vehicles to Brazil as part of Agreement 55.

Up to 18 March 2014, vehicles to the value of $40.4m will be eligible for export to Brazil, with the amount to be divided between Chrysler, Ford, General Motors, Honda and Volkswagen.

Then, between 19 March 2014 and 18 March 2015, the quota will increase to $190m. Of this amount, just more than $71.5m has been allocated to Nissan and North Pole Star, reflecting their status as new market entrants. The other $118.4m will be shared out between Chrysler, Ford, General Motors, Honda, Nissan Mexicana and Volkswagen.