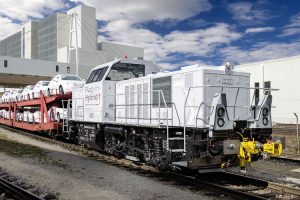 Audi has started using a plug-in hybrid locomotive to move components and finished vehicles to loading stations at its Ingolstadt plant in Germany. The company said the use of the engine will cut emissions by half compared to a conventional train, making a saving of 60 tons of CO2 a year.

The Ingolstadt facility has 18km of railway infrastructure and at the north of the site receives 15 goods trains a day loaded with parts, engines and transmissions. Along with vehicles produced at Ingolstadt Audi also receives volumes produced at other facilities for onward delivery to customers.

The 1,000 horsepower engine is supplied by rail equipment provider Alstom. It runs without any emissions inside the plant buildings and can operate for up to two hours per shift in a purely electric mode. The company said the locomotive’s battery is plugged in during breaks for recharging with CO2-free electricity, or is supported while in motion by a diesel engine. One plant locomotive carries out up to 75 shunting manoeuvers every day and operates for an average of 3,800 hours each year, according to Audi.

Audi said the move was another stage on its way to making Ingolstadt a CO2neutral factory. The carmaker has employed carbon-cutting measures for rail transport at Ingolstadt for a number of years. Back in 2010 it started using DB Schenker Rail’s Eco Plus carbon-free rail freight service for shipment of vehicles from Ingolstadt to the port of Emden in the north coast of the country.