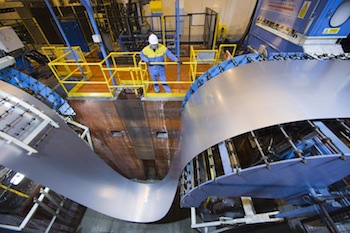 Tata Steel’s decision to exit the UK – raising the spectre of the country’s steel producing plants shutting down – has set off a number of alarms in the UK automotive sector.

Vauxhall, whose parent General Motors has a policy of sourcing products locally where possible and which has increased purchases of Tata-made steel in recent years for the Ellesmere Port-built Astra and Luton-manufactured Vivaro van, has already begun looking for other sources of supply, admitted UK spokesman, Denis Chick.

“In the UK we buy all the grades of steel which Tata produces relevant to us, and only go elsewhere when it does not produce the grade we require,” he said. “But we cannot just sit back and wait for a closure scenario to happen. Our purchasing team is already starting to look at other potential sources of supply. And it’s not too much of a problem because there’s a lot of steel in the market out there – the market is flooded with the stuff.”

If the British steel industry were to close down, Vauxhall’s UK operations would be able to draw upon General Motors’ plants in Spain, Germany and Poland and their steel-sourcing arrangements, he suggested.

A spokesman for Nissan, which has a plant in the northeast of England, admitted it, too, was heavily dependent on UK-produced steel but said it did not currently anticipate any production problems.

“Raw materials and parts are sourced for all Renault-Nissan plants in Europe through our Alliance purchasing organisation. This year about 45% of the steel required for production in Nissan’s Sunderland plant is sourced from [Tata’s plant in] Port Talbot, and the rest from mainland Europe. At this time, we do not anticipate any disruption to production,” he said.

Others, like Toyota, appeared even less concerned. A spokeswoman for Toyota, which produces vehicles in Derbyshire, told Automotive Logistics: “We do not source our steel from the UK. It comes from mainland Europe, mainly ArcelorMittal in France, but also from others.” But she declined to comment on the implications for the automotive industry of any closure.

Ripple effectsChris McDonald, CEO of the Materials Processing Institute, however, has warned any closures could create a ripple effect that would be felt throughout the whole automotive parts supply chain, causing companies to close and jobs to be lost.

Most of the public focus so far has been on the possible closure of the steel-making Port Talbot works and the loss of around 4,000 direct jobs that would entail.

“But we’re not just talking about the jobs gone from there, terrible as that would be, but job losses right across the SMEs in the automotive supply chain throughout the country,” said McDonald.

Associated steel strip processing plants downstream from Port Talbot would be among those affected, along with the innovation, product development and related high-tech engineering skills, because steel is a foundation industry upon which much of manufacturing depends, stressed McDonald.

“The supply chain in the UK would fold if automotive parts’ suppliers could not source their steel from within the country,” he predicted, adding that such a development would go against the current trend in the British automotive industry of reshoring a lot of its manufacturing.

McDonald cited the example of a niche exhaust systems manufacturer in the West Midlands which sources strip steel from a Tata Steel UK plant. If that plant were to close, the only other place the exhaust maker could source the required grade of material would be a mill in Germany. “He would either have to face the higher costs of shipping the strip from Germany or go out of business,” McDonald cautioned.

And the death of the British steel industry could have even wider implications in the longer term, McDonald told Automotive Logistics.

“When the carmakers decide on their next round of investments, they would look to a country which could guarantee security of supply,” he pointed out. “Britain could no longer do that for steel – and would therefore lose out. So the automotive supply chain has to be retained.”

Ironically, the steel sector does not generate a lot of profit from those of its products that are destined for the automotive industry. But steel is very valuable to the supply chain and the British economy as a whole, he said.

Government actionUK manufacturing industry association the EEF has said it is vital the government takes the lead and acts firmly with a clear plan to retain a sustainable, viable steel sector in the country. Measures it could take include reducing the high cost of energy – one of the factors cited by Tata Steel for its decision to exit the UK.

The EEF would also like to see a lowering of business rates and moves to lobby the European Commission to place higher tariffs on cheap Chinese steel imports.

In a series of fast-moving events, the UK government has moved to try and maintain a steel industry in the country. At the time of writing, industry minister Sajid Javid was poised to meet senior Tata Group executives, including chairman Cyrus Mistry.

Possible buyers for parts of the business have also come forward, though what happens to Tata’s engineered, special steel plants in the Sheffield area of South Yorkshire, which includes vehicle makers among its customers, has not featured much yet in the public debate.

A possible complicating factor in any eventual sale is the profitable IJmuiden plant in the Netherlands, which is the main base of Tata Steel’s automotive segment and one the company is set to retain.