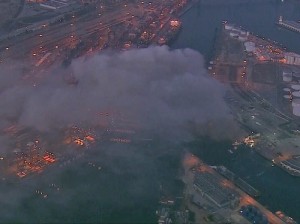 Container and finished vehicle operations at the port of Los Angeles were temporarily disrupted last week by a major fire that broke out in a warehouse at the Wilmington terminal operated by Pasha Stevedoring and Terminals (PST). The fire also temporarily affected the nearby international terminal operated by Yusen, as well as disrupting services at three terminals at the neighbouring port of Long Beach.

More than 800 wharf workers were evacuated from the scene as a precaution.

The fire broke out at around 6.45pm on Monday 22nd on Fries Avenue in the centre of the port. The facility affected is used to load and unload material as well as store steel coil. Firefighters battled with the blaze for more than 32 hours, extinguishing it by 6.30am on Wednesday 24th. The port of Los Angeles reported that 90% of services were restored by the next day.

“The impact on cargo, including autos and auto parts, was minimal, a spokesperson for the port of Los Angeles told Automotive Logistics News. “No cargo vessels were diverted during the incident. We had a couple of breakbulk ships that sat at anchor for a day and then entered port. We basically lost part of the Monday night shift and the Tuesday day shift. Terminals caught up quickly upon resumption on Tuesday night.”

The port will be cleaning debris out of the water for the next couple of weeks.

While some reports have indicated that the cause of the fire was a torch-welding operation, the official cause is still under investigation.

“LA Fire preliminarily reported that it was linked to a welding operation,” the port spokesperson said. “That has yet to be verified by a full investigation.”

The facility affected was coated in a liquid creosote material designed to prevent erosion, which made it highly flammable.

Pasha’s berth 179 has been out of operation since the fire but the company said it is able to service all of its customers’ vessels using its other available berths. These included the vessel M/V Ultra Dynamic, which was brought in alongside berth 176 for discharge, while M/V Martha Pride was brought alongside B-209. Both vessels are bulk carriers and Pasha said that none of its services for the automotive trade were affected. It was also keen to commend the work of the fire services.

“While the fire has impacted terminal facilities, we are very fortunate to have had zero injuries reported,” said PST in a statement. “We are grateful for the dedicated firefighters and emergency responders, and our thoughts are with the people living and working in the surrounding communities as the smoke clears.”