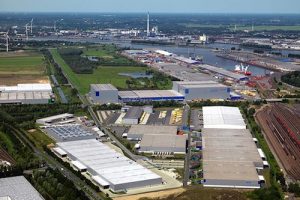 German logistics provider BLG has added a further 28,000 sq.m to its  automotive parts facilities in Bremen following the transfer of space at the Freight Village GVZ by real estate developer Panattoni Europe. It brings BLG’s total footprint at the GVZ facilities to more than 200,000 sq.m, across three logistics facilities: LC Bremen, LC GVZ and now LC GVZ 2. This is more than half of BLG’s total indoor storage in the Bremen area. The group now occupies a total of 300,000 sq.m in Bremen.

The GVZ facility is the largest of its kind in Germany and at the same time BLG’s largest facility for automotive parts logistics. Construction of the second building – LC GVZ 2 – began in 2014 and was completed in March this year. BLG has now also completely occupied this space in an expansion of its auto parts provision.

“The new space is a sign of growth in our business along with improved utilisation of our capacities and ideal satisfaction of the demands put forward by both new and long-standing customers,” said BLG’s industry logistics executive Frank Sturm.

According to the company, more than 40,000 containers of vehicle parts a year are packed and delivered just-in-time for Daimler’s assembly plants in Asia, the Americas and Africa. The parts and components arrive from the carmaker’s plants in Germany and from several hundred of its suppliers.

The implementation of a new production strategy by Daimler means that transport volumes have been increased considerably, said BLG in a statement this week. The volume of containers shipped to China alone, thanks to the expansion of the Daimler plant in Beijing, will rise to 20,000 units this year.

“Being able to build a facility of this magnitude at this site is, for us, an important step in the expansion of our activities throughout Germany,” said Fred-Markus Bohne, an executive at Panattoni Europe.