BLG move to Bronka is a vote of confidence in Russia 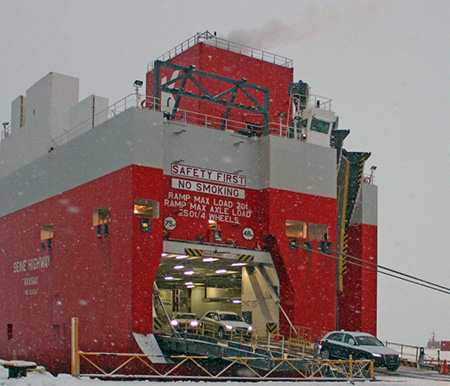 German logistics provider BLG Logistics and LLC Fenix, the owner and operator of the Russian port of Bronka, have signed an open-ended agreement for the handling of finished vehicles through the port.

Vehicle-handling activity will move into full swing in 2017 in an early sign of confidence in the recovery of the Russian automotive market, which has been in heavy decline since 2013.

“We still believe in the Russian market and we are very optimistic that in 2016 we have seen the bottom [of the market],” a spokesperson for BLG Automobile Logistics told Automotive Logistics.

Domestic vehicle sales in Russia grew 0.6% in November compared to 2015, the first rise in the market for two years, according to the Association of European Businesses. Through November, however, the Russian market remained down 12% from 2015 volumes, and was expected to finish around 1.4m units – around half the level of 2012.

The port of Bronka, which lies near St Petersburg, on the Neva Bay inlet of the Gulf of Finland, opened in 2015. While some spot ro-ro shipments have been made to the port, the agreement with BLG marks the first regular business for finished vehicles.

The move could also chime with Russian plans to increase vehicle exports with increasing utilisation of local plants, something the government is supporting with infrastructure investment and incentive packages. So far, OEMs in Russia have discussed plans to increase shipments to the Middle East and eastern Europe, although volumes have been slow to increase.

A move from City PortThe agreement with Fenix means BLG will move all its terminal activity from the City Port in St Petersburg, where it has been since 2009. A spokesperson for BLG said that annual volumes through City Port stood at around 50,000 units, but this will all move to Bronka port along with operations including vessel discharge, storage, truck loading and stock maintenance.

At the port of Bronka, BLG will start with a terminal capacity of 6,000 units on a 12-hectare site with 25 truck loading bays. The ro-ro terminal covers 41 hectares. BLG will also be providing hinterland road services, alongside other domestic providers.

“Beside the local companies, BLG has an own-truck fleet of 50 trucks in Russia and is offering transportation services from the port and local factories throughout Russia as well,” confirmed BLG’s spokesperson.

The terminal at Bronka is also connected to hinterland Russia by rail with a freight service provided by Russian Railways that is already in operation. Fenix is working with Russian Railways to increase the capacity to 8-10 trains a day.

As part of the deal, BLG has already begun test shipments of VW units through Bronka, both for import and export. This is part of a three-year agreement between the OEM, logistics provider and port owners. Almost 1,000 cars were recently delivered by ocean forwarder K-Line on its vessel Seine Highway (pictured) for the Russian market, while more than 200 Volkswagens made at its Kaluga plant in Russia were loaded for the return leg to Europe.

According to Fenix, the ro-ro terminal at the six-berth port will be able to handle 260,000 units but this is expected to hit 500,000 vehicles when fully developed. The ro-ro terminal port has a 12.4-metre depth of berth to handle large car carriers.

BLG is not required to make any investment at the port of Bronka as all vehicle handling infrastructure is already in place.

The carrier said it would increase the number of employees it had in Russia following the move and would be recruiting mainly from the local area.

Awaiting market recoveryWhile capacity at the port is high and is set to grow, volumes of Russian imports and exports are currently much lower. According to figures from IHS Markit, more than 75% of Russian light vehicle sales are currently met by domestic production, with around 330,000-350,000 imports expected by the end of 2016.

In 2014, when sales were around 2.5m units per year, Russia imported around 775,000 vehicles. IHS Markit doesn’t expect the Russian market to approach similar import levels again until it has fully recovered in 2026.

The port will also face competition from other locations. Prior to the decline in the market, Russia saw investment at a number of other vehicle terminals in the Baltic, including in St Petersburg and Ust-Luga.

The port of Bronka was officially integrated within the boundaries of the nearby ‘Big Port of St Petersburg’ by government order last year.

Since its opening, there have been a number of developments at the port including a long-term agreement for the handling and storage of container cargo with CMA CGM, the world’s third largest container shipping company. Bronka is also now handling high-and-heavy cargo.