Bristol begins UK vehicle exports to US with WWL 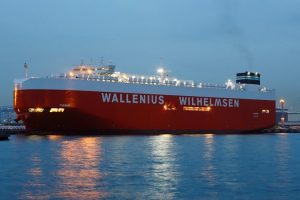 A new weekly ro-ro service is shipping Jaguar Land Rover, Mini and construction equipment from the UK's port of Bristol to the east and west coasts of the US.

The first consignment was loaded aboard WWL's MV Theben on April 29th, with the first call being at the US east coast port of Baltimore. From there, the vessel will take vehicles and machinery onto the west coast via the Panama Canal, calling at the ports of Hueneme and Tacoma.

“We are the nearest major UK port to the USA and this is the first ship of a weekly service that reflects the booming car export business at Bristol port,” said David Brown, CEO at The Bristol Port Company. “Last year, the port handled nearly 200,000 vehicles for export and a 20% increase is predicted this year.”

The export figure of 191,000 represents a near-46% increase on the previous year. Overall the port handled 719,000 vehicles last year, with the top carmakers supported including FCA, Toyota and Vauxhall/Opel. The company said it now had around 218 hectares of car compounds, including nearly 90 hectares of common user storage.

WWL said it was adding the port of Bristol to its Europe to US west coast schedule to support increased cargo flows from the UK in consultation with its customers there, and would be calling between three and four times a month.

“WWL has maintained a strong presence in Bristol via inbound services from the Far East and the addition of an export service will further cement the existing strong relationship the company has with Bristol Port Company,” Paul Reeves, head of UK for WWL, told Automotive Logistics. “Having the option of multiple ports in the UK provides terminal capacity at a level required to service large-scale export volumes that is valued by WWL and our customers.”

WWL's MV Theben is one of its new Hero (high efficiency ro-ro) vessels and was named last year. WWL is introducing eight such vessels into service over the next three years, three of which are already in operation.