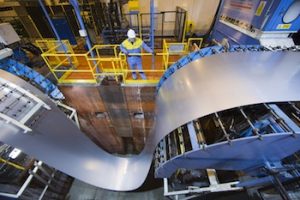 Vehicle manufacturers in the UK have begun drawing up contingency plans to cater for possible disruption to steel supplies in the wake of uncertainty over the future of Tata Steel UK.

It follows a statement by the Tata Group at the end of March that it had decided to exit the UK, a move that generated alarm in the UK automotive sector. Tata Steel UK was subsequently put up for sale.

Though the chances of plant closure appear to have faded somewhat thanks to a pickup in the overall steel market since then, the likelihood of costlier steel remains a concern to some carmakers.

Industry analyst Mitchell Hugers, commodities strategist at BMI Research, told Automotive Logistics: “If the proposed sale were to go through, prices for sheet, engineered and drawn steel could be raised in order to make the steel plants more financially viable. However, as we expect global steel prices to remain subdued, this could result in vehicle manufacturers shifting their demand to other suppliers – most likely overseas.”

Steel and car production have both carried on as normal since March but the threat of higher costs and a break in supply has been exercising the minds of managers at a number of Britain’s vehicle makers.

Vauxhall is probably the manufacturer most exposed to the possibility of a plant closure as it buys around 60% of its sheet steel from Tata’s Port Talbot steel-making and Llanwern finishing plants in South Wales.

Spokesman Denis Chick said the matter had not had any effect on Vauxhall’s Luton and Ellesmere Port plants, however, and that contingency plans were already in place to cater for any shutdown at Port Talbot. “It’s only a question of the inconvenience and the additional cost of bringing in the steel from abroad that we have to worry about,” he said. “There’s plenty of steel available, so we have no problem there.”

Nissan, which sources around 45% of the steel it needs at its Sunderland car plant in north east England, said it did not anticipate any production problems either. As raw materials and parts are sourced for all Renault-Nissan plants throughout Europe via the group’s Alliance purchasing organisation, the company said it could draw upon other sources of supply.

At Honda (UK), spokeswoman Karen Parry told us: “The company has a plan in place if Tata closes its plant in the UK. We would increase our supplies from another source.” She declined to provide further detail, however.

Jaguar Land Rover (JLR) – which is part of the Tata Group – declined to comment on its position. Toyota, meanwhile, will be unaffected by the issue as it does not source its steel from the UK, buying instead from mainland Europe, mainly from ArcelorMittal in France.

‘Business as usual’Tata Steel UK spokesman Fred Johnson said it was still “business as usual” at the steelmaker for now, adding: “Nothing has changed for all of our operations. It’s an ongoing process to find a responsible buyer for the whole of the company as it is now. The hope is that the buyer will continue with all of the operations and there will no impact on customers whatsoever.”

It remains to be seen, however, how any new owner will work with Tata Steel’s IJmuiden plant in the Netherlands, which plays a major role in the steelmaker’s automotive offering and in its research and development programme – something that should be considered as part of the standard due diligence process, suggested Johnson.

One industry observer we spoke to said there was now less urgency about the Tata Steel UK sale as the British operation was now breaking even after recent steel price increases. Industry analysts, meanwhile, increasingly appear to be steering away from the doomsday scenario of major disruption to automotive steel supply.

“There is no shortage of steel supply from elsewhere, particularly Tata’s works in the Netherlands,” said senior powertrain analyst at LMC Automotive, Caely Beecham.

“Demand from the UK automotive sector could be increasingly met by IJmuiden instead of the UK plants,” added Hugers of BMI Research. “Besides IJmuiden, Tata holds multiple manufacturing operations throughout Germany, France, Belgium, Sweden, Turkey and Spain which could potentially be an alternative.”

Tata has shortlisted seven bidders for the UK company and is understood to be in detailed discussions with a number of them, as well as other interested parties such as the unions and the British government.

According to the UK’s Society of Motor Manufacturers and Traders (SMMT), the British automotive industry consumes more than 1.6m tonnes of steel annually, equal to around 17% of the country’s total steel consumption.