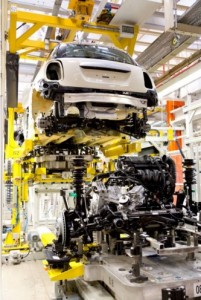 Automotive logistics has finally made it to prime time television. ‘Building Cars Live’, a three-hour special broadcast over the past two evenings on the UK’s BBC channel, showcased Mini production at BMW’s plant in Oxford.

Fronted by James May, Kate Humble and Ant Anstead, the show mixed live coverage with pre-recorded sections, and followed the manufacturing of a vehicle at the plant, with a few sections focusing on the humble logistics sector.

“Building cars is no small feat,” James May declared at the start of the show. And squashing the entire process of building (and shipping) a car into two 1.5 hour-long programmes is no small feat either. Many of the complaints the show has received have been about ‘dumbing down’, but this is a programme on at prime time on the BBC – no-one is going to want to sit through the car equivalent of the ‘Park Lanes’, a torturous eight-hour ‘documentary’ about a typical day in a bowling alley recently shown at the BFI London Film Festival.

Viewers found out that a car rolls off the line every 68 seconds at the Oxford plant, and every vehicle is built-to-order and customised. The plant has two sister plants: steel is pressed in Swindon, and the engines are built in Birmingham, and there are 350 suppliers around the world shipping parts to the plant.

Each Mini has around 6,000 parts, and the show highlighted just how important the logistics department is to making sure each part is on the line just-in-time and just-in-sequence. The warehouse has around 500,000 parts through it each day, managed by ‘Bob’, the plant’s computer system that alerts pickers as to which parts are needed. Once the tow trains are full, people drive them to the line.

The plant holds around an hour’s worth of stock for most parts, and several important aspects such as the engine, seats, and front of the car are built off site. The bumper supplier for example delivers to the plant every 45 minutes.

Of the many deliveries arriving at the plant, all are monitored via track and trace, and drivers can be updated in real-time if there are any traffic problems. During the recent strike issues and migrant problems at Calais, the plant even resorted to using helicopters. 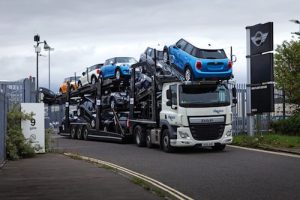 The finished cars leave the plant via rail and truck. Of the 1,000 cars produced a day, 600 are loaded onto trains, and 400 go by truck to distribution centres. Around 80% of cars produced at the plant are exported. Each car transporter can carry 11 vehicles, and takes nine minutes to load.

The plant has its own train service operated by DB Schenker, which joins up to the national rail network. Each train can hold 300 cars, with 30 vehicles on each double-decker wagon. Once the wagons are linked, the train is 684-metres long. Two trains leave the plant each day. From the Oxford plant, the trains travel the 76 miles (122km) to Southampton port.

Just 30 years ago, the UK exported 200,000 vehicles a year, and today it’s over 1m. Of all the cars manufactured in the UK each year, around 80% are exported. The vehicles that featured in ‘Building Cars Live’ were being loaded onto the 4,000 capacity NYK Triton Leader vessel (which “regurgitates cars like a very large owl” according to James May). The vessel was scheduled to take 12 days to go across the Atlantic, then through the Panama Canal, stopping at Hueneme port on the US west coast, then across the Pacific to Yokahama.

Overall the programme showcased the UK automotive manufacturing and logistics industry in a great light. Recent news from the Society of Motor Manufacturers and Traders (SMMT) shows that the UK automotive industry is expected to break manufacturing records by the end of the decade, with annual car production expected to pass the 2m mark by 2020. Around 9,500 jobs at OEMs in the UK will be required to achieve this goal, with an additional 28,000 positions expected in the supply chain. ‘Building Cars Live’, which provided a rarely seen insight into the day-to-day production and logistics underpinning the growth of the industry can only help to attract those numbers.