Nicolas Maure is moving out of his role as CEO at Russian carmaker Avtovaz to take up a new position at the beginning of June as Renault Group senior vice-president alongside his role as chairman of the Eurasia region at the carmaker. 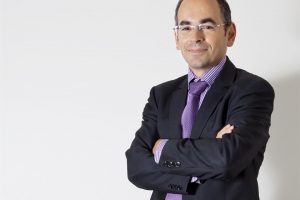 Maure continues to serve at Avtovaz as chairman of the carmaker's board of directors, a role he took up at the beginning of April.

Maure joined Renault in 2000 as purchasing director of the Parts and Accessories division, after a career at Valeo and Faurecia. He then moved to become director of the Dacia powertrain plant in Romania before becoming vice-president of powertrain at Renault-Nissan Purchasing Organization and. In March 2013, he was appointed vice-president of Renault Group Manufacturing Performance. He took over from Bo Andersson as head of Avtovaz in 2016.

Yves Caracatzanis (pictured) is moving into the CEO role at Avtovaz from his current role as managing director for Renault Group in Romania, where he is also president and CEO of Automobile Dacia, a position that Maure held before his move to AvtoVaz.

Caracatzanis has been with Renault since 1992 when he joined as project manager for the logistics organisation. In 2008, he helped shape the development of the Supply Chain division at Renault Group and was appointed director of Supply Chain at Renault in 2010 before becoming manufacturing and supply chain director for the Eurasia Region.

Antoine Doucerain is taking over as managing director of Renault Group in Romania. He joined Renault in 1993 in the Logistics Engineering division before going onto a number of senior manufacturing roles in France and Brazil at both Renault and Nissan.

“I extend my sincere thanks to Nicolas Maure for his contribution to Avtovaz performance,” said Sergei Svortsov, chairman of the board of directors at Avtovaz. “Despite some ongoing risks, the company is on track for financial recovery. With Yves Caracatzanis, we plan to continue the development of Lada sales in Russia and abroad, the optimisation of costs internally and, in cooperation with suppliers, the review of the Lada vehicle line-up so as to implement the Avtovaz mid-term plan.”