Carmakers keep an eye on the skies over Iceland 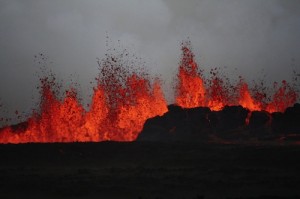 OEMs and logistics providers are looking at the skies over Iceland again as eruptive activity at the Bardarbunga volcano continues into September.

Fears are that there will be a repeat of the ash cloud disruption that severely hampered global automotive supply chains back in 2010 when the Eyjafjallajokull volcano grounded flights across Europe.

A number of earthquakes have hit the area over the last couple of weeks, with the greatest recorded being a magnitude 5.5 event. Last week a column of gas and fire was captured by infrared camera stretching 1km into the air above the volcano.

The volcanic activity coincides with a busy period for the automotive logistics industry as OEMs and suppliers replenish buffer stocks.

According to Brad Brennan, managing director at emergency logistics specialist, Evolution Time Critical, while current forecasts are unclear as to whether an ash cloud is imminent, a number of OEMs are taking no risks.

“We have spoken with a number of customers that are proactively looking at contingency planning to secure robust processes, as vehicle manufacturers and suppliers are increasingly aware of the cost of supply chain failure,” he said.

“The possible threat of flight disruption means that it is crucial for vehicle manufacturers to work harder than ever to ensure contingencies are in place where possible,” added Brennan.

BMW is just one carmaker keeping a close eye on the situation.

“We are watching the situation very carefully and will take according actions if necessary,” a spokesperson for BMW confirmed to Automotive Logistics News.

Those companies providing air freight services are also monitoring the situation. A spokesperson for Air France-KLM-Martinair Cargo, which has a number of automotive clients, said that it was monitoring the technical evaluations from European aeronautical and meteorological specialists.

Ceva Logistics, which is providing regular updates on the situation, said it would continue to closely monitor all press releases from the Icelandic Met Office and other sources to provide regular and timely updates to its customers.

“Contingency plans are in place and will be implemented as appropriate in case the situation develops,” said the company in a statement.

According to Brennan, meanwhile, given the global nature of the automotive industries’ supply chains, the ramifications for being unprepared for widespread flight disruption could affect markets worldwide.

“The worst case scenario of utilising proactive contingency is that there is no direct impact from the Bardarbunga volcano, but OEMs are heavily protected against future supply chain nuances; whereas the cost of failure through lack of preparation could run into millions,” he warned.