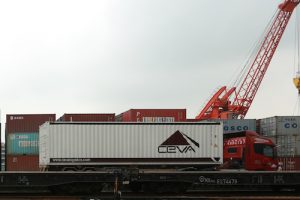 Ceva Logistics is building on its China-Europe rail service with the launch of a new route linking Shilong, in southern China's Guangdong province, to Hamburg in Germany.

Ceva has built a rail network around the northern route between China and Europe since it began with shipments out of Suzhou, just north-west of Shanghai, in 2010. Key cities included in the network within China are Changsha, Shenyang, Hefei, Chongqing, Chengdu, Zhengzhou and Wuhan. They are linked with European destinations including Moscow, Warsaw, Łodz, Duisburg, Hamburg, Nuremburg and Tilburg. From these points, Ceva said it could transfer freight to its truck network for onward delivery to other major European cities.

The logistics provider said the new route would take 17-19 days and save customers two days, compared to alternative routes.

"This new link further extends our rail services between China and Europe and enables us to provide customers with a reliable, highly secure door-to-door service with real-time track and trace along the route," said Kelvin Tang, Ceva's head of cross-border, Greater China.

Last month, China announced ambitious investment plans for its One Belt, One Road economic and trade plan to support strong growth in rail services between China and Europe. The China-Europe rail link through Russia and Central Asia, which is a central part of the trade initiative, has seen a fast rise in services over the past two years. Demand for rail freight is also growing in the automotive sector as customers look to cut ocean transport times for certain cargo without incurring high air freight costs.

Back in March, Ceva extended its joint venture partnership with Chinese automotive logistics provider Anji for an additional 15 years. Anji-Ceva is the largest contract logistics provider in the country with revenue of nearly $1 billion in 2016.