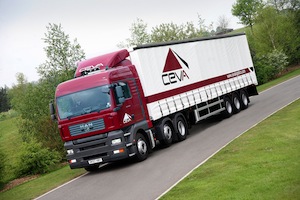 In February Ceva Logistics launched a new weekly less-than-container load (LCL) service between China and Hungary, with the majority of cargo volume accounted for by the automotive industry.

The weekly service, which runs between the port of Shanghai and Budapest, currently goes via the Adriatic port of Koper in Slovenia. Containers delivered to Koper are taken by rail and road to the Hungarian capital. However, disruption on the Slovenian rail network (as reported earlier in February) means that Ceva is now rerouting freight from China through the Italian port of Trieste, 20km to the north. A spokesperson for the company said that in Slovenia it could resort to back up carriers when needed and could use direct trucking options, which also included using its own trailers. Trieste will become the main port for the service from the beginning of March said a spokesperson.

The ocean journey time is 30 days, with an additional 5-7 days for the inland leg of the route. Ceva is working with several ocean carriers, including MSC, UASC and Hanjin.Ceva said its Budapest warehouse is ideally located for onward services to other Ceva facilities in Europe. The company also said it had eliminated additional transshipment handling costs and devanning at the port of Shanghai by taking the service in-house.

Ceva is also offering customers the opportunity to track their boxes by using its OneView online track and trace tool, and is guaranteeing high security by virtue of handling the whole process in-house.

“This is an end-to-end Ceva-owned solution for our LCL customers,” said the company’s global LCL director, Greg Scott. “It starts with our own dedicated trucking network in China where we can feed into Shanghai from key cities across the country. And with our Ceva warehouse in Budapest operating as our container freight station (CFS) there is no external handling of cargo or any third-party warehousing. It’s a win-win solution with better controlled transit times and service quality which are great benefits for customers.”

A spokesperson for Ceva added that the company had plans to set up lanes outbound from Easter and Central Europe to various overseas destinations in the near future, which included China, though these will not be directly linked to the inbound service to Budapest.