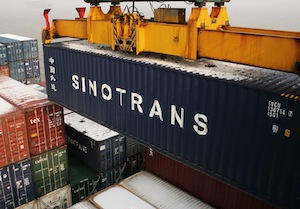 According to Reuters the merger places brings together CMG’s assets worth an estimated 624 billion yuan ($96 billion) with those owned by Sinotrans & CSC estimated to be about 109 billion.

“This takeover will effectively merge the resources, business and talents of the two giants, and create economies of scale and synergies in operations that include logistics, dry and wet cargo shipping, development of ports and industrial parks, as well as equipment manufacturing,” said CMG in a statement.

As previously reported, one of Sinotrans most recent automotive contracts involves handling inbound containerised parts destined for Chery's joint venture plant with Jaguar Land Rover in Changshu. Playing its part in what is a complex supply chain between the UK and China, Sinotrans transfers containers at the port of Shanghai for temporary storage before an onward journey of some 80km along the Yangtze River to the inland port of Changshu. There it hands over the material at a deconsolidation centre to Anji-Ceva.