Deutsche Bahn’s freight wing, DB Schenker, has signed a five-year deal “worth tens of millions” of euros with US-based online freight shipping marketplace uShip, a platform that matches shippers and carriers through mobile and internet devices. 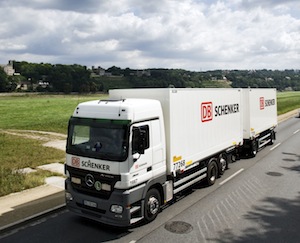 Later this year DB Schenker will launch its own ‘Drive4Schenker’ (D4S) online platform to match drivers and cargo using the uShip software. The company said that it would enable around 25,000 Schenker-approved transport providers to find opportunities to pick up cargo along their routes in real time, allowing a faster service for customers because available transport orders and freight capacity would be immediately visible. The platform will include carrier reviews, pricing, quote comparisons and transport monitoring.

“As the market leader in European land transport, we want to tap the potential we have for greater efficiency and further optimise our unique land transport network for the benefit of both, our customers and our carriers,” said Ewald Kaiser, board member for land transport and chief executive of the Europe region at DB Schenker.

Eric Fox, vice-president of land transport direct road at Schenker, admitted that because the automotive industry had a relatively high predictability of volumes and stable inbound planning compared to other industries, the functionality around the D4S spot market may not be used to its full potential. However, he told Automotive Logistics that the digitised real-time monitoring of inbound material flow would be a definite improvement.

For inbound material, for example, the D4S platform would monitor the transport execution of inbound supplier collections, including full or less-than-truckload shipments and milkruns, said Fox. It will support both regular planned and fixed collection routes, as well as spot-based emergency shipments.

“Drivers can use the Drive4Schenker App and only need to have internet access through their smartphone,” he said. “The system will recognise, [via] GPS, in case trucks have left the collection address and will ask drivers automatically to confirm on-time collection.”?

Schenker dispatchers, who take care of the overall inbound control, will be able to create a private network of dedicated automotive carriers and manage pre-planned fixed routes. The D4S platform will allow those dispatchers to advertise additional capacity needs in case of unforeseen volatility.

“The beauty of the system is that it works almost self-intuitive for the carriers and drivers, so a relatively low threshold for usage and implementation,” said Fox.

He added there were even potential applications for finished vehicle movements because the system could be used to monitor any freight type. “DB Schenker will eventually open the platform for shippers to ‘self-serve’ their own carriers,” said Fox. “This way DB Schenker may tap into markets where [the company] is not recognised yet.”

DB Schenker will begin the service in Germany and other selected European countries with the aim of integrating the entire European network step by step.