DHL launches cross border LTL service between US and Mexico 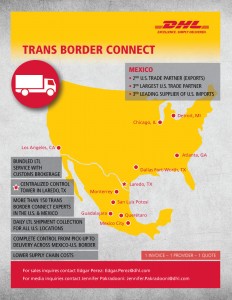 [This story was updated on Thursday 23rd July] DHL’s freight handling division, DHL Global Forwarding, has introduced a less-than-container load (LTL) service between the US and Mexico that it said has already been adopted by the automotive, engineering and manufacturing sectors, among others.

Han Roest, global sector head of automotive at DHL Global Forwarding, told Automotive Logistics that, within the automotive sector, a large portion of the overall market consists of OEMs and tier suppliers with manufacturing locations in the Midwest and southeast regions of the US, with shipments coming from their suppliers in Mexico.

“There is also a lot of intra-company transportation on the trans-border traffic for companies that have manufacturing locations in both Mexico and the US,” said Roest. “The automotive sector accounts for 13% of DHL Global Forwarding’s Trans Border Connect business.”

The company said that the business forms part of its domestic freight offering and is “a bundled solution” that offers a single quote for a range of services. These include pickup and line-haul transport, border crossing and clearances, cross-dock, and delivery of components. The company said the service was able to offer lower supply chain costs and simplified billing, as well as end-to-end shipment visibility, providing a single point of contact monitored by staff in its centralised control tower in Laredo, Texas.

Asked how a bundled solution was of benefit to the cross border movement of automotive material in particular, Roest explained that the typical supply chain for automotive trans-border transport included several parties, such as trucking companies and customs brokers.

“Usually, a different broker is involved on each side of the border,” said Roest. “As a result, several hand-offs occur and there is a significant risk of delay in addition to losing visibility of the shipment status. This scenario adds cost, and the customer receives several invoices for the same transaction.”

Roest said that the Trans Border Connect service negates those problems through increased visibility and a faster door-to-door transit time.

“Automotive companies are very cost-conscious, so any savings in transit as well as a more streamlined administrative process (single invoice) will add tremendous benefit,” added Roest.

DHL stated that the service is initially being offered for transportation to and from five strategic markets in the US and Mexico, with all border crossings at Laredo, Texas.