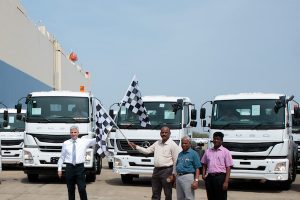 Daimler India Commercial Vehicles (DICV), part of Daimler Trucks Asia, has exported its 10,000th truck from the port of Karmarajar, near Chennai, on an MOL vessel. The vehicle in question was a 40-ton heavy-duty tractor destined for Indonesia and was part of a consignment of 250 trucks on the way to markets in southeast Asia.

The company began making medium and heavy-duty trucks for export back in 2013 and combined with sales in the domestic market, under the BharatBenz name, it has now made more than 50,000 vehicles.

“Our exports business has been developing extremely well,” said Erich Nesselhauf, managing director and CEO of DICV. “Since the launch in 2013, we have doubled our figures each year and we aim for further significant growth as we expand to serve more than 40 markets on three continents by the end of the year.”

The company said that beyond finished trucks it had also already exported more than 1,000 bus chassis from the plant in Oragadam, near Chennai, and was increasing volumes of its Mercedes-Benz school bus for export to the Middle East. Last year, DICV also hit the milestone of 4m truck parts exports to its global markets.

The 10,000 mark reached this week was just the start, according to Mark Llistosella, head of Daimler Trucks Asia and president and CEO of its second subsidiary, Mitsubishi Fuso Truck and Bus Corporation.

He said the company was looking at “continuous significant growth” for the Fuso and Mercedes-Benz truck brands exported from India to growth markets in southeast Asia.