Driverless train trials underway between Germany and the Netherlands 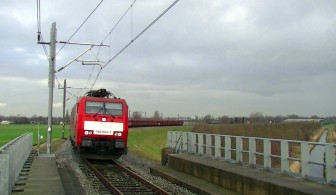 Dutch rail network manager ProRail is working with Germany’s DB Cargo on trials to test an automated freight train service on a route between the port of Rotterdam and the German border at Zevenaar-Emmerich.

The double-track dedicated freight rail line, known as Betuweroute, is 160km long and equipped with the European Rail Traffic Management System (ERTMS), a replacement for traditional signalling equipment that instead uses digitized, mostly wireless alternatives. The ERTMS is an EU initiative designed to enhance the safety and efficiency of trains, as well as improve cross-border interoperability. It aims to create a single Europe-wide standard for train control and command systems.

Freight movements along the line could in theory lead to increased track capacity because the time intervals between trains could be reduced.

The project is still at an initial stage and further details on the service are subject to ongoing studies and discussions, according to a spokesperson for DB Cargo. He said that all activities regarding the new services with ProRail fell within the Shift2Rail initiative and would be announced depending on ongoing planning, working packages and the stage of maturity of each activity.

Shift2Rail is a European rail initiative designed to speed the integration of the latest technologies into services to meet transport demands in the region. The research being carried out under the initiative, which is part of the Horizon 2020 EU funding programme, is aimed at developing the technology necessary to complete the Single European Railway Area (SERA).

As well as being the largest container port in Europe, Rotterdam handles finished vehicles at the Rotterdam Car Terminal operated by C.Ro Ports Automotive. Last year it handled around 295,000 vehicles.

Full test operations on the rail link are planned for 2017.