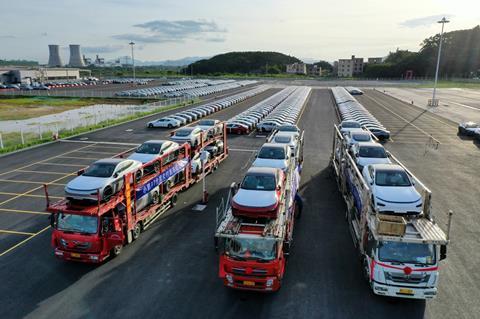 Chinese electric vehicle (EV) maker Xpeng Motors has started distributing its Xpeng P7 high performance sports sedan this week to dealers across the country. It is the first production model to come out of the EV maker’s plant in Zhaoqing, Guangdong Province, since it was granted its official production licence in May this year. The plant was built in 15 months and is situated in the Zhaoqing Xpeng Motors Intelligent Industrial Park.

While the first vehicle to be made at the new Zhaoqing plant, the P7 is the carmaker’s second production model. Its first model, the Xpeng G3 compact SUV, is made at a plant in Zhengzhou in partnership with Haima Automobile and began distribution in December 2018.

“By bringing manufacturing in-house, Xpeng is enhancing the autonomy, robustness, flexibility, cost-efficiency and intelligence of its vehicle production,” said the company in a statement.

Production of the P7 began in May this year and Xpeng Motors is ramping up manufacturing at the plant for an annual capacity of 100,000 units.

Xpeng is selling the vehicle through a network of 190 sales and service centres across 57 cities in China.

The EV maker worked with battery producer CATL on the lithium NCM cells used in the battery. The company said the P7’s ultra-thin high-performance battery pack is only 110mm in height, reaching 170Wh/kg energy density to deliver close to 81kWh of power.