More than 1,000 vehicles were destroyed or damaged at the Italian port of Savona last week as storm flooding of the port’s automotive terminal triggered a fire that swept through the storage yard. 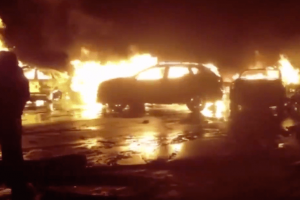 According to the Western Ligurian Sea Port Authority, Savona was hit by the storm on October 29, causing flooding across the port’s vehicle and container handling terminals. In the case of the Savona Auto Terminal, which is operated by Grimaldi Group, the authority said first reports indicated the flooding caused a short circuit in the vehicle storage warehouse, which caused cars to catch fire and explode, spreading the fire rapidly.

Savona Terminal Auto operates on a 120,000 sq.m space of which 10,000 sq.m are covered, and is located in the Docks High Alps, a short distance from the quay. It has a total storage capacity of 6,000 vehicles.

A full investigation into the cause is now underway and the port authority and terminal operators are making an assessment of the damage. They will be putting an emergency response plan into place, according to company, though further details have yet to be revealed.

The port authority reported that “several hundred vehicles destroyed in the blaze were brand new Maseratis”, which were being stored at the terminal ready for shipment to the Middle East. Maserati has yet to confirm the number.

The governor of the Liguria region, Giovanni Toti, has visited the vehicle terminal and assured the shipping community that the regional local authority would be giving full support to the immediate needs of the terminal operating companies.

“The key objective of the port authority and region is to resume port operations in full as rapidly as possible, with the option to adopt emergency procedures already in use in Genoa’s port in response to the tragic collapse of the Morandi Bridge,” said the company.

The Morandi Bridge in Genoa collapsed in August this year, killing 43 people.

The latest fire at the automotive terminal was the second major one to break out at the port in a week. On October 23, the port authority building was completely destroyed by the earlier blaze.

There was widespread damage across the northwest of Italy last week because of severe storms. Several smaller ports have been destroyed as 100km-plus winds whipped up huge waves; those hitting Savona reached a height of seven metres, according to local press reports. Twenty-nine people have so far died in the region because of the weather.

Savona is one of four ports – called the Ports of Genoa – under the Western Ligurian Sea Port Authority, the others being Genoa, Pra and Vado. The Savona Auto Terminal has the capacity to handle 250,000 vehicles a year.