time:matters extends flight services from Germany to UK and Ireland 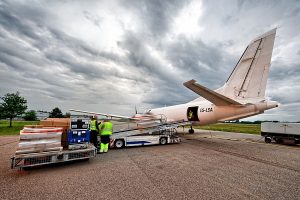 German freight expeditor time:matters has announced additional flights for its spare parts logistics service, adding a route from southern Germany to Birmingham in the UK and to Dublin, Ireland.

A third Saab 340 aircraft will join the existing planes departing every night from Baden-Airpark, west of Stuttgart, near the French border.

“Almost 10 years ago, this service was initially offered in all Scandinavian countries and to Italy. Now, time:matters also offers late pick-up combined with very early delivery for France, Spain, Greece, the whole of the Baltics and Moscow,” said Christian Mörtl, COO of time:matters. “We are delighted to now be in a position to also offer this to customers from southern Germany for shipments to the UK.”

The Lufthansa subsidiary said it had already managed to sell part of the additional cargo capacity to a UK logistics service provider.

A spare parts service to the UK and Ireland has been running flights out of Frankfurt and Maastricht since 2011.

“The service is not only especially popular with numerous producers of agricultural equipment, but also customers in the medical technology, IT and automotive sectors,” said time:matters in a statement.