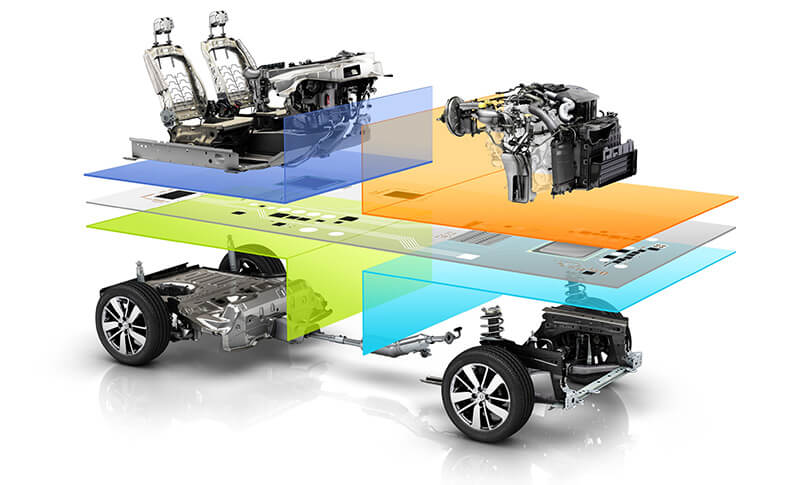 Renault and Nissan began their wide-ranging alliance and set up cross-shareholdings in each other back in 1999, and since then Daimler, Avtovaz and most recently Mitsubishi have also become part of this evolving structure. Numerous shared vehicle platforms, manufacturing and logistics operations and back-office functions have been developed. Furthermore, impressive results have been claimed – although other than cross-shareholdings and project-specific information, the Daimler figures are excluded from the numerous figures quoted by the Alliance to demonstrate its success.

The Alliance was, however, able to report that Renault-Nissan-Mitsubishi sold just over 10.6m vehicles in 2017, making it the second biggest automotive group worldwide, behind Volkswagen (10.7m) and ahead of Toyota (10.47m).

At the core of the Alliance are the cross-shareholdings between Renault and Nissan; Renault holds 43.4% of Nissan and Nissan holds 15% of Renault shares; the two companies have 50% each in the Renault-Nissan BV Dutch holding company, which has a board made up of executives from each company. Nissan also has a 34% stake in Mitsubishi, a ratio that under Japanese law gives it effective managerial control.

Significant savingsIn June 2018, the Alliance reported that it had achieved synergy savings in 2017, across the Renault, Nissan and Mitsubishi brands, of €5.7 billion ($6.6 billion), a 14% rise on the synergy savings from 2016, reflecting the first full year of Mitsubishi’s presence within the Alliance. The aim is to reach €10 billion of savings by 2022; and to do this, greater alignment in aftersales, quality and customer satisfaction, and business development processes is underway. 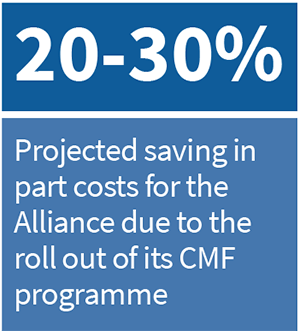 In addition to the synergy cost-savings, the Alliance has a mid-term plan to 2022 that aims to raise sales across the three brands to over 14m units, of which at least 9m will be built using four common platforms, including electric vehicles, and with common powertrains achieving 75% penetration, up from a third today.

Shared platforms and engineering have yielded significant benefits and are in operation throughout all the brands’ line-ups. For example, not long after Mitsubishi came within Nissan’s orbit, the two companies started work on a joint programme to develop the next generation of kei (sub-660cc engined) cars for the Japanese market.

Other synergy developments since then have included:

• Extensive benchmarking between Nissan and Mitsubishi throughout the ASEAN area

• The establishment of shared spare parts warehousing between Renault, Nissan and Mitsubishi – initially in Australia (see box below), with other sites to follow in Europe and Japan

• Manufacturing co-operation and further use of shared platforms, notably with the Datsun Redi-Go and Renault Kwid small SUVs for emerging markets; and the production of the Renault Alaskan (and Daimler X-class) pickup on the Nissan Navarra platforms in Nissan plants in Barcelona, Spain and Cuernavaca, Mexico

• Building on the above pickup manufacturing arrangement, the creation of a single LCV (light commercial vehicle) business unit to maximise potential for savings in development, manufacturing and general costs. This arrangement brought Alliance models to nearly 80% market coverage, with 18 models made on shared platforms across the three brands.

Referring to this progress, Alliance chairman Carlos Ghosn said “deeper convergence and increased synergies will cement the sustainability of the Alliance for the long term.”

"Deeper convergence and increased synergies will cement the sustainability of the Alliance for the long term." - Carlos Ghosn, Renault-Nissan-Mitsubishi Alliance

With Mitsubishi now also part of the Alliance, it is not surprising that the first half of 2018 produced another set of record results, with sales of 5.54m vehicles suggesting that 2017’s total will be surpassed. The Alliance’s goal of achieving combined sales of 14m by 2022 would be a 30% rise on 2017.

The integration of Mitsubishi into the group has broadened the international spread of its business. China is now the Alliance’s number one market, followed by the US (despite the absence of Renault from this market). France is in third position, followed by Japan in fourth and Russia in fifth.

Common programmesRenault and Nissan’s co-operation centres on their shared CMF (Common Module Family) programmes, which cover the main B, C and D segments; the best-known and biggest programme here is the CMF-C/D platform which underpins the Renault Mégane, Scénic, Kadjar, Koleos, Talisman and Espace, the Nissan Qashqai, X-Trail and Rogue and the Samsung QM6 (sister vehicle to the Korean-made Koleos) especially.

[mpu_ad]Similar programmes cover the A and B segments: the Renault Kwid and Datsun Redi-Go small SUVs are made on CMF-A, while from 2019 the Renault Clio and Captur, and Nissan Juke will be produced on the CMF-B platform, with the third generation Dacia Sandero and Logan adopting this programme in 2020. A new B-segment Mitsubishi model will adopt the CMF-B shortly after 2020. The fourth generation Mitsubishi Outlander will adopt the CMD-C/DS platform in the early 2020s.

CMF allows vehicles within each segment to combine standardised engine compartment, front and rear underbody structures, and cockpit designs to create differently-sized vehicles with variable heights, according to market profiles and positions. The modular approach is intended to generate a 30-40% saving in each vehicle’s development costs and a 20-30% saving in part costs.

However, it is the way in which the Alliance’s co-operations with Daimler have expanded which really shows the spread of CMF into different segments. There are more than a dozen major projects in action now, across Europe, Japan and Americas (see chart below).

Future programmes are expected to see Mitsubishi’s kei car expertise being used more widely at Nissan, while Mitsubishi’s plug-in hybrid expertise is expected to be heavily used going forward at both Renault and Nissan. Neither of the original Alliance partners have any substantive capability in hybrid technology.

Mitsubishi’s impactIt did not take long for Mitsubishi’s role within the Alliance to become clear. In April 2017, a new combined Renault-Nissan-Mitsubishi LCV business unit was founded. This has a specific focus on merging Renault’s van expertise and Nissan’s truck production, along with Mitsubishi’s expertise in pickups and utility-oriented SUVs.

The overall aim is to have one business unit with three brands having enough ‘space’ to differentiate themselves while maximising the use of development, technology and manufacturing resources.

The Alliance’s first shared parts warehouse is a 37,000 sq.m site operated by Ceva in Melbourne, Australia. Opened in July, it will also support the Infiniti brand, Nissan’s premium offering.

Kent O’Hara, global senior vice-president of aftersales in the Alliance, described the warehouse’s launch as “a significant milestone [and] another example of how the Alliance continues to generate synergies to the benefit of our companies, customers and shareholders at a global level”.

The facility currently houses more than 90,000 parts and accessories with a capacity for 100,000 and receives 11 incoming containers arriving by sea daily, as well as parts which are air-freighted or locally sourced. Eight 'B-double' transporter trucks, which consist of a tractive unit hauling two trailers, deliver 8,500 parts to dealerships across Australia from the site per day.

The warehouse, which employs over 90 people, has been designed with sustainability in mind and features a roof-mounted solar power system, LED lighting and both daylight and motion sensors to help reduce electricity use.

This has long-established programmes, especially in Europe where Renault has made the NV300/Primastar and NV400/Interstar for many years; the Nissan NV200 (currently made in declining volumes in Spain) is expected to move to a version made on the Renault Kangoo in the next couple of years. The Nissan NP300 is also used as the basis for the Renault Alaskan.

In future, this arrangement will be extended to allow the business unit to benefit from Mitsubishi’s expertise in the development and manufacturing of Nissan’s body-on-frame SUVs, especially the US-market Armada and the internationally oriented Patrol. Nothing definite has been decided or announced regarding whether a Nissan (NP300) or Mitsubishi (L200) base will be used for future pickup models. Certainly, only one platform would be required here for the combined operations.

No mood for a mergerPeriodically, as was the case in 2017 when reports emanated from Japan, claims from one side or the other suggest that a full merger of Renault and Nissan into one company is under consideration.

Such reports are usually quickly denied but it would not be surprising for this idea to be revived in the near future. One of the reasons for this is that Carlos Ghosn chairs both companies, and also now Mitsubishi. Securing his legacy once he retires through merging the companies into one could be very attractive for the man who has done so much to create the current set-up.

However, executives within each company are keen to maintain each brand’s autonomy and uniqueness, and for now this viewpoint holds sway. Significantly, Trevor Mann, who has played senior roles at Nissan, both in Europe and Japan, is now in charge at Mitsubishi, steering its turnaround. Interviewed by the Financial Times in July, he suggested that now was “probably not” the right time for a merger, but added that it was possible in the future, stating “you have got to do it when it’s right and it makes sense for you” and adding that Renault’s lack of a direct holding in Mitsubishi could be an issue. Yet he also suggested that this was “not stopping us from looking for synergies with Renault because [Mitsubishi is] part of the larger Alliance.” 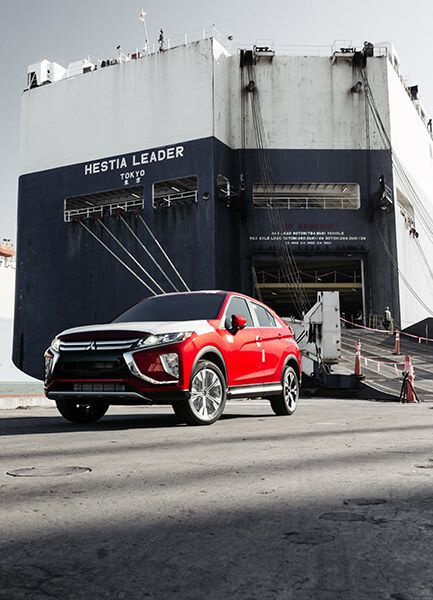 Mitsubishi has now come onboard the Alliance, complicating the synergy process

There is also a fine political balance between Renault and Nissan, with Renault effectively having de facto control of its stablemate via a 43.4% stake in it (just like Nissan’s 34% stake in Mitsubishi gives it control there). Nissan has just 15% in Renault, by contrast.

One Japanese observer, Takeshi Miyao, Japan analyst at consultancy Carnorama, told the Financial Times that “if Nissan’s bargaining position increases, Renault’s relative position will appear to have declined, which could upset the existing alliance between the two companies”, adding that “to maintain the power balance, it may be necessary for Renault to invest in Mitsubishi”.

Much remains to be done to complete Mitsubishi’s turnaround and any direct involvement by Renault will almost certainly wait for this to be completed. However, as Mitsubishi models come up for renewal, they will adopt more technologies, components and platforms from Renault-Nissan and also contribute the company’s own expertise, especially in plug-in hybrid technology (something in which Renault and Nissan have been sorely lacking) and in pickup/SUV technology. 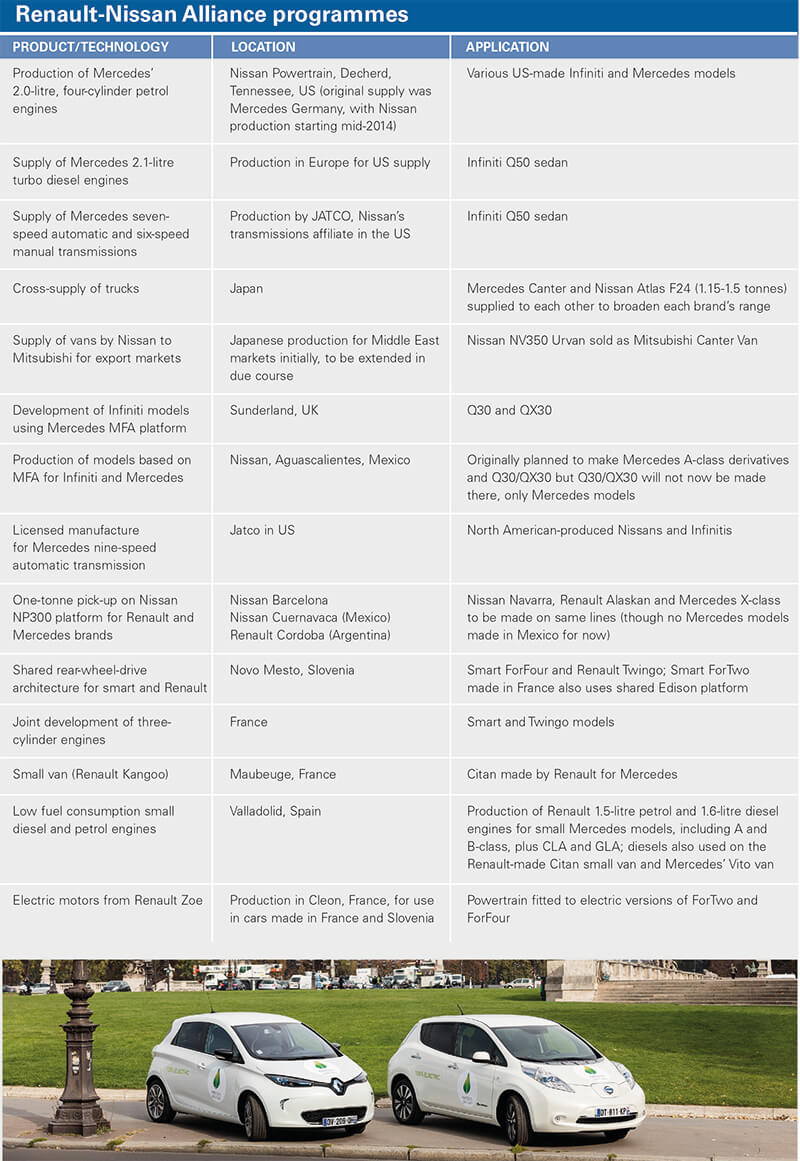