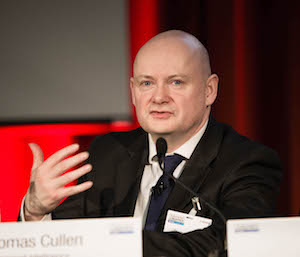 The automotive business is changing and in doing so it is facing new risks that threaten the supply chain. This potential threat is exacerbated by a lack of attention to those risks until things go wrong. However, risk is mitigated by better visibility and that depends on getting the right information. Unfortunately, according to Thomas Cullen, chief analyst at Transport Intelligence (pictured), a huge proportion of the information available is “very dodgy” – he cited the Tianjin port explosion last year as just one example of how an unforeseen incident could have global supply chain repercussions.

That point was picked up Quintiq’s senior logistics consultant, Shaun Joughin, who also pointed to Tianjin and how the supply chain fallout was complicated by a lack of visibility. He said it was difficult to put risk scenarios into the area because sources were hard to identify, meaning the industry took some time to respond. What is essential is having the right information to create scenarios and quantify the risk. And creating scenarios for improbable outcomes is not wasted time because the process equips a company with a time-saving responsiveness.

Improving information is especially important to the automotive supply chain because of its higher level of complexity compared to other industries. Risk projections are based on historical data but the world is changing.

Cullen cited the dramatic change in the size of container vessels, which are now able to ship 20,000 containers, to question whether there was a linear or exponential relationship between size and risk. He said a fire aboard a container carrier of that size would be a considerably worse scenario than one carrying 5,000 TEUs. He also pointed to the Fukushima earthquake in Japan. “Suppliers were wiped out by that,” he noted. “The response is to diversify and have more than one manufacturing facility and there is common sense in the industry. One reason for single sourcing is the higher economies of scale but that has changed now.”

Bram Ewals, CEO of Ewals Cargo Care, linked risk with uncertainty but pointed out that uncertainty was not something to be avoided. Alluding to the seven-year contracts it has on transport equipment, he said how difficult it was to see how that equipment would be used across that time, as well as different end-of-lease agreements and different contract durations. Ensuring its suitability for multimodal transport was one way of preparing for a drop-off in demand or a change in equipment length legislation in one or other of those modes.

“Scenario planning helps us understand where events could happen and then we have time to have upfront discussions about adapting the logistics process,” said Ewals. However, he added that the window for response in reallocating resources in response to inbound deviations could be as little as a week, even with stable production planning. Border problems because of the European refugee crisis and sudden strike action by transport or plant staff were also risks and responses needed to be in place in just as little time.

At the end of the day, sharing all available information is a good way of building the best accuracy into a scenario and is good for business. “Planning up front and being proactive on possible events and working together gives you more visibility and there is trust there,” said Joughin. "Risk collaboration brings efficiency savings.”