Japanese ocean ro-ro carrier K Line is expected to take delivery of its first vessel powered by liquified natural gas (LNG) in the fourth quarter of this year, following its launch from the Tadotsu Shipyard. The vessel has capacity to carry more than 7,000 vehicles. 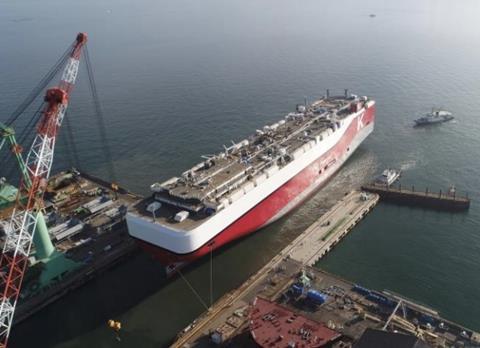 K Line ordered the vessel in December 2018 and said that by building LNG-fuelled car carriers it was actively responding to a wide variety of customer transport needs while also answering the environmental priorities and the move to a more sustainable society. That followed the establishment in 2015 of K Line’s environmental management plan for 2050 called Securing the Blue Seas for Tomorrow. As part of that plan K Line said it would reduce CO2 emissions by half and replace the majority of energy currently consumed by fossil fuels with “new energy sources”.

According to the company, compared with conventional fuel oil used to power ships, LNG fuel reduces CO2 emissions by about 25-30%, sulphur oxides by 100%, and nitrogen oxides by about 80-90%.

The latest launch follows similar moves toward more environmentally fuelled vessels by vessel owners around the world, including Siem Car Carriers, UECC and WW Ocean. That falls in line with new rules established by the International Maritime Organisation (IMO), which came into force at the beginning of this year and enforce the global reduction in the sulphur content of marine fuels to 0.5%.