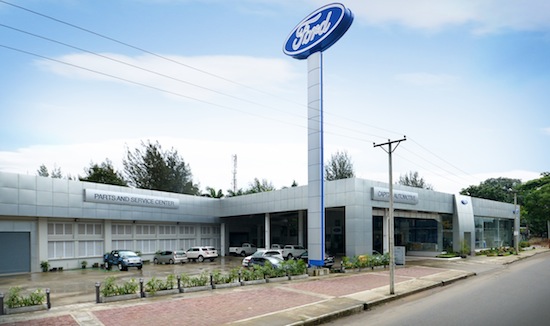 Ford vehicles sold in Myanmar will be imported from Ford’s global production facilities in North America, Europe and Thailand.

The dealership has been built to match Ford’s global design standards and has a capacity of 2,600 square metres. This includes a showroom and servicing area with capacity for 12 vehicles.

The opening of the facility showcased Ford vehicles that are already available in Myanmar, such as the new Ranger and the US-brands Taurus and Explorer. Many vehicles currently bought and used in Myanmar are imported, second-hand Japanese cars.

Ford’s entry into Myanmar is the latest in a string of automotive investment in the country, which has been opening up its economy and diplomatic relations. Last month, Nissan announced that it would build the first car plant there with a local partner (http://www.automotivelogisticsmagazine.com/news/%E2%80%8Bnissan-plans-local-output-in-myanmar).

The move by Ford is part of a wider strategy of expansion in southeast Asia and the ASEAN region, which represents a population of 600m. The company has targeted countries like Myanmar, Thailand and Indonesia as an antidote to lesser sales in Europe. Representatives from Ford have said that, by 2020, 60-70% of its global growth will be thanks to growth in southeast Asia.

This growth is bound to present an array of logistics challenges in the region. The World Bank's most recent Logistics Performance Index, serves to reveal the great disparity in current logistics competencies across ASEAN. Thailand, for instance, ranks 38th on the list of countries, Vietnam 53rd, Indonesia 59th, Cambodia 101st, and Myanmar 129th. This is a far cry from Singapore's leading position in the rankings, and demonstrates the difficulty of assessing ASEAN's potential under an umbrella term. Lead and import times and costs vary enormously across the range of countries within ASEAN, with Myanmar near the bottom in such categories.

Matt Bradley, Ford ASEAN’s president, said that the move represented “the latest step in Ford Motor Company’s aggressive expansion in Asia Pacific”. He added that ventures within Myanmar would help the automaker to gauge opportunities across the ASEAN region.

Ford announced its entry into the country in April of this year, and has since committed to investments designed to train its local workforce and bring in technical experts to facilitate this.

Earlier this year, Vivek Vaidya, vice-president for the automotive and transportation department for forecast and research analysts Frost & Sullivan, told Bloomberg: “Southeast Asia is going to assume immense importance in the next couple of years. The market share of Japanese companies is over 80%, hence all other players are scrambling to win their market share in this region.”

David Westerman, regional manager for Ford’s Asia Pacific Emerging Markets Group, said: “Every aspect of the facility has been designed and built to provide an industry-leading customer experience – which is so important to Ford, especially here in Myanmar, where for many people, a new Ford will be the first vehicle they have ever owned.”

To better implement Ford’s strategy of growth in the region, RMA, a specialist provider of products and services to economies and companies in transition, has been working with the group. This has so far included sending technician apprentices to RMA’s training facility in Laem Chabang, Thailand, for a month-long Ford Technician immersion program.

The OEM hopes that these measures, coupled with the base manufacturer’s warranty on all Ford vehicles sold in Myanmar, cements its intention to expand significantly into the country, localising its workforce and committing to long-term success.

“We plan to make ongoing investments that help support the country's economic and social development, which includes professional skills training and career development for our employees,” said Kevin Whitcraft, RMA’s CEO. “As business grows, we expect demand for more qualified workers and technicians to increase, and more careers to be hatched. These types of meaningful contributions will help drive the tremendous potential and opportunity in Myanmar.”