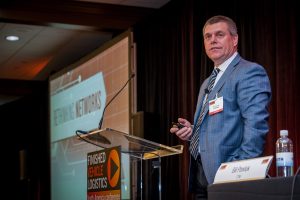 The finished vehicle sector in North America has made some significant advances over the past few years in terms of bringing greater efficiency to the network. Despite that, it remains characterised by wasteful empty backhauls, which account for as much as 40-50% of mileage, according to some estimates.

Some executives think that a more radical solution to this is needed, including the use of more flexible equipment and a better use of the latest technology to manage routes. It also requires tackling some firmly held views on inbound carrier networks. .

According to Bill Pawluk (pictured), chief executive of Convertible Trailers Manufacturers (CTM), a company that has patented a design for car carrying trailers that convert to flatbeds, the sector needs to rethink its network if it wants to kick “a 100-year bad habit”.

“We all know there is a tremendous under-utilisation of our carrier assets because they are built specifically for transporting finished vehicles,” he said at the FVL North America conference in Newport Beach, California. “At the same time, we have all this new technology and connectivity – there must be some way to use these to our benefit. Currently it is highly under-developed and under-used.”

The opportunity to exploit the convertible concept in the US was given a boost in December last year with the introduction of the Surface Transportation Reauthorisation and Reform Act (or FAST Act), which included an amendment to rules governing the trucking sector to allow greater flexibility in the use of vehicle transporters with stinger systems. Under previous legislation, stinger-steered vehicles were prevented from combining different types of freight in certain respects. More specifically, non-vehicular freight was not allowed to be loaded on the tractor portion of the truck.

However, it is not just down to having the convertible equipment, it is also about making the best use of data-rich technology. CTM has partnered with German software provider Inform to produce a routing data analysis software tool called CLIC (Convertible Logistics Intelligence Centre). The tool combines information on inbound and outbound flows.

“We can take your inbound and outbound data and throw it into this tool,” explained Pawluk. “It will process it and come up with a relationship between the flows. We can also put in general non-automotive freight flows and figure out how we can bring automotive logistics closer to general freight logistics, without losing the specialisation of the existing methodology.”

However, carmakers are cautious about interfering with inbound networks that are tightly routed on milk runs or through consolidation centres, while outbound transport is also based on moving as many full loads as possible.

Lee Hansen, senior buyer at Nissan North America stressed that Nissan was careful with its carrier networks and the way they are working today. “A certain carrier may be going to a certain area but they may also be working for another OEM coming back the other way,” he noted. “There is a balance there and we want to make sure we keep it.”

However, Hansen also acknowledged that finding freight for the backhaul through a convertible method was a niche solution that Nissan could be interested in, especially between flows of vehicles and containers at ports. He highlighted Nissan's activity in Mexico and the movement of vehicles through Veracruz port for short sea delivery to the US, and said that there might be an opportunity to move imported parts back to plants.

That sort of move is something Pawluk is already looking at: he cited some research that offered potential benefits in this direction. “One area of opportunity we have found around the world involves [vehicle] exports to ports and containers with parts in them on the return journey,” he said. “That is whether it is for the OEMs themselves, as in the case with Volkswagen, but it is also about being able to compare carmaker outbound flows to the ports with another OEM's flow back.”