Global conference: Building cars is one thing, getting them to market is another 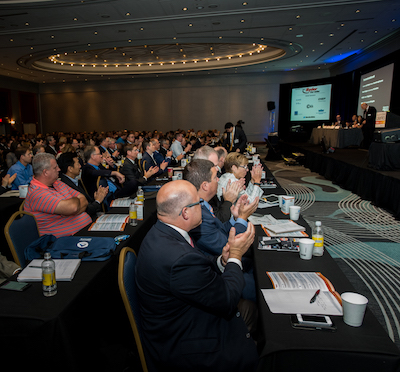 The infrastructure and logistics services underpinning the volume growth in emerging automotive markets will need investment, if carmakers are to make the most of the opportunities these markets hold in the face of a short term sales 'plateau' in the more developed parts of the world. Delegates at this week's Automotive Logistics Global conference in Detroit were told that carmakers, tier supplier and logistics providers will have to collaborate with governments in finding answers to the problems many are facing, not least in Mexico.

The rise of new mobility models and slowing sales in mature markets have raised concerns that global automotive production is nearing its peak. However, the continued development of emerging markets will continue to drive growth. Eight out of the top 10 volume growth markets are classified as emerging, led by China, India and Mexico. Those markets are expected to contribute a massive 92% of global assembly growth between 2015 and 2022, according to analyst firm PwC Autofacts – equal to almost 21m vehicles.

At the same time, though, there are going to be growing pains in the volume opportunities for the leading global carmakers selling into these markets. One of them is logistics, according to Terese-An Nguyen, automotive analyst at PwC Autofacts. Speaking in the opening session of this week's conference, she noted that building cars was one thing but getting them out to buyers was quite another.

That is certainly the case in Mexico, which is facing infrastructure constraints as the country moves towards an output of 5m vehicles by 2021, almost double what it was last year. Mexico is largely responsible for North America's 10.5% regional contribution to global growth but the industry facing some significant problems in being able to move the increase in volumes.

Nguyen said her company had received a lot of enquiries for market analysis related to Mexico because of the rapid growth going on there. With 80% of the vehicles made in Mexico tagged for export, the question of how to get them out of a country with underdeveloped transport network was urgent. “From a rail standpoint, it is already at capacity and there is only really one true short-sea port at Veracruz on the east coast,” she said. “There is going to need to be a lot of collaborative strategy building and investment from the OEMs as well as the suppliers, processors and logistics providers."

Gene Sevilla, vice-president of international at one of those logistics providers – Ryder – pointed out that the automotive industry was just one sector that was growing in Mexico but that all industry sectors were relying on an infrastructure that was already stressed and lacking adequate investment. That included the ports, railways, highways and the telecommunications available. Border processing between Mexico and the US was also under pressure and while warehousing was a bright spot in terms of availability and quality, access links to those warehouses were lacking. “All of these are stressed and there is no investment coming to match the private investment that is being made by the OEMs at the plants,” said Sevilla. “There will be a lot of stress on the logistics participants and how they deal with added demand,” he added.

That point was picked up by Scott Mabry, senior manager of planning and optimisation at Volkswagen Group of America (VWoA). Mabry said one of the major issues was the network infrastructure in Mexico and that carmakers and suppliers needed to review what needed to be done together, because everybody needed to use it.

“We need to look at how to move the freight differently, including both the vehicles going out and parts coming in,” he said. “We all have the same issues but we can move mountains if we work together.”

Mabry went on to venture that the investment being made by the cascade of automotive companies into Mexico would benefit the overall economy but said he was at a loss to see how the government could meet the more immediate demands by the industry on physical infrastructure. Sevilla said it would have to be through joint investment from private firms and the government, because the latter simply did not have the capital required on its own.

The lack of investment in infrastructure capacity was also hampering the continued growth of intermodal logistics in the country, according to Sevilla, an area that has been growing rapidly. OEMs and suppliers were most likely to resort to road, he said, given that there were still plenty of trucks available and the Mexian carrier segment was of a high quality.

Another growing pain for the automotive industry in Mexico was securing the necessary talent in the labour force, delegates heard.

Sevilla said there was a real need to recruit skilled people, especially in the central region. That went for drivers and for experienced management. Mexico's universities are a hotbed of talent and lots of people are being trained but demand is outpacing the resource, said Sevilla.

Mabry agreed that talent acquisition was a challenge but added that there were clear signs of improvement.

Recruitment was also something integrated logistics provider CH Robinson was focused on. Alex Garza said the company was working on recruiting the best talent out of the universities and that the company had dedicated a lot of time and resources in its search for talent and the training of its workforce.

Mexico is just one example of an emerging carmaking nation that needs to address the demands on the infrastructure supporting movements both domestically and internationally. In conclusion, Nguyen asked those attending this week's conference to think about logistics infrastructure from an operations standpoint in all of them. “All of these emerging markets are seeing rapid growth and there need to be short, medium and long term strategies in place from a logistics standpoint,” she said.