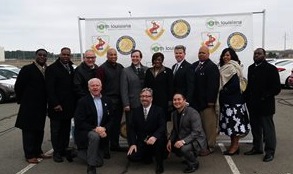 Hyundai Glovis-owned finished vehicle service provider, Glovis America, has invested an initial $1m in an inland vehicle distribution centre (VDC) at the former GM plant in Shreveport, Louisiana. As well as serving local Kia dealers, the new 11,600 sq.m facility will function as a distribution hub for the central and western US.

The facility, which opened earlier this month, is handling Kia vehicles imported from the carmaker’s plant in Monterrey, Mexico, through the port of Galveston. It is expected to handle 75,000 units a year or more. The Shreveport site has 36 hectares of adjoining land for storage with further room for expansion.

“Shreveport has been chosen after a long search and due diligence process to replace Glovis' long-term facility in Texas,” said Glenn Clift, president and CEO of Glovis America. “A combination of existing infrastructure, strong labour force, and competitive inbound/outbound rail and outbound trucking costs allowed Shreveport to beat the competition.”

Glovis America will provide a full range of services at the site, including pre-delivery inspection, repair, accessorisation and logistics staging.

The new investment at the facility is expected to provide jobs for 150 people directly and 300 indirectly.

Glovis America also provides services for Kia out of its plant in Mexico.

Glovis America has been working with the North Louisiana Economic Partnership (NLEP) and Union Pacific Railroad along with property developers and other local partners for almost a year on the project at Shreveport.

“This is a great win for the region. North Louisiana’s logistical and transportation infrastructure is a major competitive advantage for our communities,” said Scott Martinez, NLEP president.

GM closed its Shreveport plant back in 2012 and there had been some concern in the local community about why work had not returned to the plant as the automotive industry in the US recovered from the economic downturn.

Last week, Hyundai said it would increase its investment in the US by 50% over the next five years to more than $3 billion. The investment will be directed at retooling existing plants in the country.