GM forced to stop production in Brazil because of carrier dispute 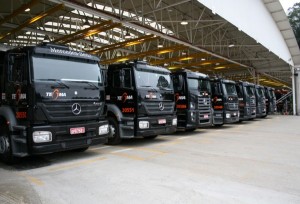 General Motors has been forced to halt production at its plant in Gravatai, Brazil because of a dispute with its outbound transport providers Tegma and Transzero over freight costs.

The carriers are reported to have stopped picking up vehicles made at the plant forcing it to stop output. However, Tegma insists it has maintained loading procedures at Gravatai and has only been stopped today (Wednesday 13 May) because of regional strike action.

The dispute had also affected the carmaker’s plants at São Caetano do Sul and São José dos Campos but disruption affecting outbound shipments at these two plants, which also began earlier this week, has since been resolved. Tegma and Transzero do not supply transport services at those plants.

“After reaching an agreement with all carriers in São Caetano do Sul and São José dos Campos, GM regrets the decision of Tegma and Transzero to stop outbound logistics at the Gravatai plant,” said the carmaker in a statement. “As we face a difficult situation in the Brazilian market, GM believes we should work together focusing on overcoming the challenges to contribute to the economic recovery. Our common goal, in partnership with suppliers, carriers and union, is to keep the unit operating in three shifts and this unilateral action forced us to stop production. We reaffirm our commitment to continue negotiations on the freight costs and are looking forward to reach an agreement that will not compromise our competitiveness in the Brazilian market.”

Tegma told Automotive Logistics that its management was surprised by GM's statement that it had taken strike action prior to Wednesday's developments. It said that it was "not true that Tegma had paralysed [GM] operations" and said its other operations beyond Gravatai were operating normally.

"As a participant in the automotive industry, Tegma has made every effort to make its operations even more efficient in order to contribute to the collective effort to restore the growth of the sector," said a company spokesperson.

The disruption adds to problems that a number of carmakers are facing in Brazil as the economy declines. Vehicle sales there have dropped by 17% in the first quarter of this year. According to Anfavea, the carmakers’ association, in April total vehicle sales, including passenger cars, trucks and buses, fell to 219,252, down 25% on the same month last year. Carmakers including GM and VW having been cutting back production in response, as well as laying off staff. Labour disputes over the layoffs stopped production at GM’s plant in São Jose de Campos back in February this year.