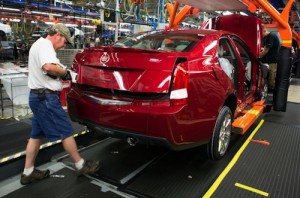 General Motors has started work on a $44.5m logistics facility at its Lansing Grand River plant in Michigan. The 37,000 sq.m Logistics Optimization Center, which is adjacent to the plant, is expected to be complete by the end of the year and operations are due to begin in 2015. It will provide employment for 200 workers in addition to the 1,540 already employed at the main plant.

The facility will be used to sequence and assemble parts to make manufacturing more flexible at the site, reducing transport and contributing to improved quality by reducing handling, according to the carmaker.

The decision build an onsite logistics facility ties in with GM’s objective of reducing material and logistics costs in North America by $1 billion by 2016. Last year Grace Lieblein, vice-president of global purchasing and supply chain, indicated that the company would be adding more logistics centres close to assembly plants to sequence parts as a way of achieving the cost savings.

The carmaker would not confirm whether the facility was being managed by a logistics provider.

Lansing Grand River makes the Cadillac ATS and three Cadillac CTS models. It made its millionth vehicle in September last year in the shape of a CTS sedan. Production of the Chevrolet Camaro is also rumoured to be moving to the plant.

Further investments are expected at the Lansing Grand River plant in the coming years, including a $162m stamping plant.

Lansing city has given GM a tax incentive that will save it $4m in taxes over 14 years.

There will be an exclusive interview with GM's executive director of global logistics, Edgard Pezzo, in the next issue of Automotive Logistics.