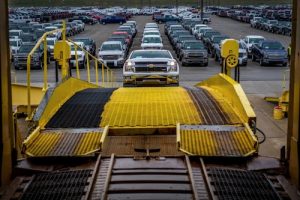 General Motors has announced this week that it will invest $1.2 billion in pickup truck assembly at its Fort Wayne plant in the US and that part of that investment would be in improved material sequencing and conveyance systems to make the plant more efficient and competitive.

The investment will include a new pre-treatment, electro-coating paint operation and sealing facility, as well as an expanded body shop and upgraded general assembly area. Work on the improvements is expected to begin next month and the carmaker said it would take several years to complete, though there would be no disruption to truck production schedules.

Fort Wayne makes the GMC Sierra and Chevrolet Silverado in their respective variants.

As part of the investment GM announced that it would be expanding its material sequencing centres and adding new ones. It is also bringing in a new skillet conveyance system for instrument panel assembly that is intended to improve worker ergonomics. The carmaker said this would lead to better product quality.

The plant currently has 72 truck docks with deliveries coming in roughly every three minutes. The plant also features almost 35 miles of conveyors.

“These new technologies and equipment will help fulfil the mission of the men and women of Fort Wayne Assembly and UAW Local 2209 to build the best full-size trucks available,” said UAW Vice President Cindy Estrada. “The investment improves the plant’s competitiveness so we can continue contributing to the community as well.”

The latest spending at Fort Wayne is part of the total $5.4 billion investment that GM it would invest in its US facilities over the next three years.

The latest investment in Fort Wayne follows a $275m investment made back in 2011 for what was then the next generation of Chevrolet and GMC full-size pickup trucks.