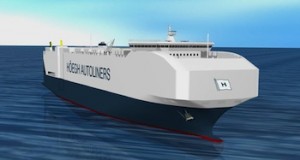 Industrial shipping company Ocean Yield has signed a shipbuilding contract with Xiamen Shipbuilding Industry to deliver two pure car and truck carriers (PCTCs) to Höegh Autoliners. The vessels will each have capacity to carry 8,500 passenger cars, the greatest capacity in the company’s global fleet, and are built on a new design that Höegh will supervise through the building process. They will be delivered in January and April 2016 on a 12-year charter. Höegh will have the option to buy the vessels after five years.

Total delivered cost for the two vessels will be approximately $137m.

Höegh already has four vessels of equal design on order from Xiamen Shipbuilding Industries, scheduled for delivery in 2015, and also has an existing four PCTCs built by the yard, which were delivered in 2010 and 2011. It received the first orders for the new design Post Panamax vessels in January 2013.

The company currently owns and operates around 60 PCTC vessels.

"The long term charters with Ocean Yield are a continuation of our fleet renewal programme which enhances our service offerings,” said Höegh Autoliners’ CEO, Ingar Skiaker. “These flexible vessels will be able to cater for a greater variety of cargo and add new opportunities to develop our cargo base.”

The yard has previously delivered four PCTCs to Höegh Autoliners, in 2010 and 2011 and received the first orders for the new design Post Panamax PCTC in January 2013.

“Ocean Yield is pleased to further expand the relationship with Höegh Autoliners,” said the compnay’s CEO, Lars Solbakken. “By this transaction we continue to increase our contract backlog of charters to leading and reputable counterparties, and thereby further strengthen our long-term dividend capacity.”

Ocean Yield has secured long-term debt financing for approximately 70% of the investment, with the remaining amount funded by equity.