Honda lands first HR-V volume from Mexico in the UK 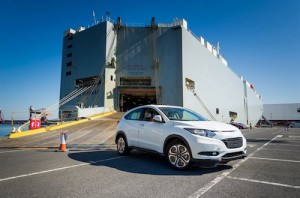 Following the news that Honda had exported its first consignment of HR-V vehicles from Mexico destined for the UK market the carmaker confirmed this week that the vehicles have now landed in the UK through the port of Bristol.

The vehicles were made at Honda’s Celaya plant in Mexico and exported via the port of Veracruz in second week of July. Almost 700 right-hand-drive HR-Vs for the UK were part of a shipment that also included nearly 800 vehicles destined for onward shipment to Belgium.

The UK consignment will now be distributed to dealerships across the UK ready for sale at the end of August. Finished vehicle transport providers ECM and STVA will be handling the distribution from Bristol to the UK dealers.

Regular shipments from the port of Veracruz will be bi-monthly and are mainly being transported by ocean logistics provider, K-Line, with MOL also picking up some volumes.

Honda de Mexico started production at the Celaya plant (HDMC) early last year and is already exporting the HR-V to the US and Canada.

The new HR-V is available at launch with the choice of a 120 PS 1.6 litre i-DTEC diesel or 130 PS 1.5 litre i-VTEC petrol engines, both part of Honda's Earth Dreams Technology series.